KUALA LUMPUR (Bernama): Health Minister Datuk Seri Dr Dzulkefly Ahmad called for thorough discussions and studies Tuesday (May 7) on the proposal to separate prescribing and dispensing medicine in the country.

Although dispensing separation is seen as important, it has to be implemented after taking into account patient suitability, interest and need, he said.

“On the separation of the functions of the clinic and pharmacy, we are now talking to the two sides.

"I have emphasised the importance of patient-centric care or patient-centered methodology, and it must be patient-based.

“To get there, we have to understand and take several parameters into account if we want to implement the practice that is in place in other countries,” he said after launching the first World Congress on

Dzulkefly said that if the system is implemented without careful consideration, various issues and problems involving patients can arise, such as the patient having difficulty finding a pharmacy after getting the prescription.

“So, in the end I feel there is still room for discussion,” he said.

Malaysia will host the inaugural congress, which is scheduled to be held at the Kuala Lumpur Convention Centre.

Organised by the Malaysian Society of Geriatric Medicine (MSGM) and British Geriatrics Society (BGS), the conference is expected to host 1,000 international and local delegates and will see leading global experts in the line-up of plenary speakers.

Dzulkefly said it was crucial for Malaysia to make early preparations and raise awareness of the problems older adults face while the nation faces an aging population by 2020.

“Early awareness is important. Many have talked of the aging population but not many see what preparation has to be made. So, we hope we will benefit from this congress,” he said.

Dzulkefly said older people have the highest risk of death or serious injury arising from a fall and the risk increases with age and, in Malaysia, preliminary results of the National Health and Morbidity

Survey in Older Persons in 2018 shows that 15% of older Malaysians fall at least once a year.

Meanwhile, the organising chairman of congress Dr Tan Maw Pin, said the objectives are to unite all agencies internationally to address the pressing issue of fall prevention in older adults to make the world a safer and better place for older people. - Bernama 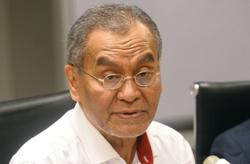