Phillip Capital Management Senior Vice President (Investment) Datuk Dr Nazri Khan said US equities closed lower on last Thursday after a revisit towards the S and P 500's November highs on trade war updates, while US Treasuries slid, and Brent crude dropped a dollar from the four-month peak to halt an incline in European energy stocks.

KUALA LUMPUR: The possibility of an economic slowdown is the biggest concern among Malaysian businesses, as the government has not provided a clear direction in steering the economy forward, says an independent market research firm.

In its “What Worries Malaysian Businesses” survey, Ipsos Business Consulting (Ipsos BC) found that the top three concerns among businesses were a slowing economy, uncertainty over government policies and fluctuation in the ringgit.

It noted that among SMEs, local large enterprises and multinational companies, a slow-down in the economy would be a top concern.

It added that for SMEs and large enterprises, the uncertainty over government policies and the fluctuation of the ringgit was placed second and third, respectively.

However, for multinational companies, the fluctuation of the ringgit was more of a concern than uncertainty over government policies.

It added that the sentiment towards own business prospect in the coming year also fell from an index of 3.5 in July last year to 3.1 in April this year.

The survey also noted that the performance of various indicators such as the Bursa Malaysia KLCI index, declining palm oil prices, fluctuation of the ringgit, as well as the slowing down of the construction and housing sector, have led to anxiety for Malaysian businesses.

“If you ask businesses, they will tell you that the signals that they have been getting actually make them uncertain about how well the economy is doing. If you look at crude palm oil prices, it has reduced since elections.

“The Bursa has also dropped about 5% to 6%. There is also a slowing down in the construction sector. These are the signals (businesses) have been receiving, which they (makes them) feel that perhaps there is a chance the economy may soften.

"They are not seeing it at the moment, but it is something which they are worried about,” Ipsos BC country head Kiranjit Singh said during a press conference on Thursday (May 2).

The survey also found that businesses wanted the government to focus on stabilising the ringgit, ensuring consistent policies and improving financial support for businesses.

It said SMEs hoped that the government would provide better financial support, while local large enterprises and multinational companies would like the government to minimise red tape and regulatory burden, as well as to promote better governance in the public sector, to foster a more conducive business environment.

The survey also said investment in digital infrastructure was viewed as the most important investment to boost the competitiveness of the economy, adding that businesses also viewed investment in rail and renewable energy as important.

The survey pointed out that to maintain optimism among businesses, it was imperative that key drivers of the local economy were identified and the relevant corresponding economic policies mapped out clearly for businesses.

They also want economic plans to be communicated clearly.

One suggestion was for the government to provide quarterly updates of the state of the economy, and to avoid making statements on policies that were still in its preliminary stages. 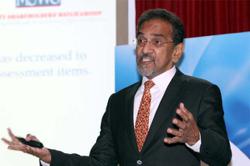