PH has bigger battles ahead

Moving forward: Pakatan supporters near the polling centre during the Rantau by-election at SJK (T) Rantau, Negri Sembilan. Pakatan leaders have called on their party members to close ranks and prepare the coalition for bigger battles ahead.

PETALING JAYA: Pakatan Harapan leaders have called on their party members to stop looking for scapegoats as a result of three straight by-election losses, but instead close ranks and prepare the coalition for bigger battles ahead.

Parti Pribumi Bersatu Malaysia central committee member Tariq Ismail said that Pakatan parties had only themselves to blame for the losses and it was time to reassess.

In the last three by-elections, Pakatan lost to Barisan Nasional in the Cameron Highlands parliamentary constituency and the state constituencies of Semenyih and Rantau.

“We need to learn from our mistakes. We can blame it on the Malays still being under a siege mentality and catatonic, but most of us know the 14th General Election manifesto is weak and most promises cannot be fulfilled in the short term.

“I suggest the PH parties realign themselves with the government and become a ruling coalition,” said Tariq.

In tying up the by-election losses to the performance of the nearly one-year-old government, Tariq said that all component parties need to be more focused on the main objective of the Pakatan government – how to best spur the economy.

He pointed out that Bersatu, PKR, DAP and Parti Amanah Nasional should pay more attention to what Prime Minister Tun Dr Mahathir Mohamad had said at the Nikkei conference last June.

“Dr Mahathir spoke of Vision 2020 and he needed another five years to achieve it. We should now come up with an economic masterplan for the next six years – Vision 2020+5. Vision 2020 is still achievable as the targets were fundamental targets.

“Bearing in mind that the country has less than one year to 2020, this realignment will lay the groundwork and help the nation get back on track economically and socially,” said Tariq.

Party insiders say there has not been much cohesion in the way the parties work during the by-elections. Members of the component parties say the leaders seemed to work in silos during campaigning.

PKR vice-president Tian Chua said there were micro and macro factors for the three losses.

“This includes wrong choice of candidates, poor coordination, lack of clear campaign messages and lethargy among PH supporters,” he said, adding that other factors include failure to command a cohesive narrative to convince the people that the government is on the right track.

He said the current economic atmosphere was quite grim and the people were facing hardship.

“Such sentiments are difficult to correct as the government is still struggling to rectify past shortfalls,” he said.

A DAP source refuted allegations that the party is angry with its national vice-chairman M. Kulasegaran over his remarks when campaigning for Pakatan candidate Dr S. Streram in Rantau last week.

Kulasegaran was said to have played the race card when he allegedly commented that Indians should vote for an Indian in the Rantau by-election.

The DAP source said that there would be no disciplinary action on Kulasegaran, for now.

An Amanah central committee member who spoke to The Star also denied claims that their members were pointing the finger at other parties.

“It is not true that we are blaming anyone (for the losses). We will conduct a proper post-mortem on the Rantau loss soon enough before we decide on how to get our act together as a coalition again,” said the Amanah leader.

Meanwhile, PKR president Datuk Seri Anwar Ibrahim said the Pakatan Harapan presidential council would meet next week to determine the candidate for the upcoming May 11 Sandakan parliamentary by-election. He said, however, it had been agreed that the seat would be contested by DAP.

“The decision is DAP. And we will give our full support,” he told reporters after attending the Digital Native Agenda (DNA23) Digital Dialogue Series on Funding Diversity programme.

The Election Commission has fixed the date for nomination to be held on April 27 while early voting is on May 7. The seat became vacant following the death of Sandakan MP Datuk Wong Tien Fatt on March 27.

On the post-mortem of the Rantau by-election, Anwar said he was still waiting for the report from the state chapter.

“We are currently doing the post-mortem. It is still being prepared. I am waiting for the report from the state,” he said.

Mohamad had a 4,510-vote majority over his main rival, Dr Streram from Pakatan Harapan, who garnered 5,887 votes. 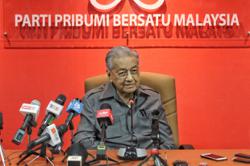 Many wish Dr M happy birthday, including his rivals