PETALING JAYA: The two teenage girls who went missing after celebrating the Tamil New Year together have been found.

"We will send them for a medical evaluation after we finish taking their statements.

"We will know more once we have spoken to them," he said when contacted on Monday (April 15).

According to Divyaa's mother, T. Shanthi, the two are school friends who had gone to a nearby temple for the Tamil New Year prayers.

“Divyaa then spent some time in Natshatra's home, which is 10 minutes from our house.

“Around 11pm, she texted me that she was taking a Grab home, but she never did,” Shanthi said when contacted on Monday.

It is learnt that Natshatra had accompanied Divyaa downstairs to wait for the Grab ride, which was later cancelled.

One of the girls' family members learnt from the condo's security guard that he saw the two girls walking out of the area together.

A Grab spokesman had said that from the company's records, the passenger cancelled the ride, so the driver proceeded to pick up another passenger. 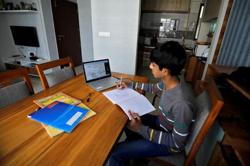