GEORGE TOWN: Zinc roof sheets were caught on video swirling high in the sky like pieces of paper over Tanjung Tokong, blown by a waterspout that gave many Penangites a scare.

Photos and videos of the waterspout, which was spotted near the UDA flats, as well as the huge sea waves that crashed on land went viral on social media.

Septuagenarian Hamidah Bee Md Kassim said she was drying her clothes when suddenly the strong winds struck and she had to run into her house crying for help.

“I was very scared and ran into the house immediately. I was lost for words when I saw the wind blowing off the zinc roofs nearby,” said the 72-year-old housewife.

Hamidah, who lives with her 81-year-old husband and 39-year-old daughter, said the waterspout only lasted for around 10 minutes. 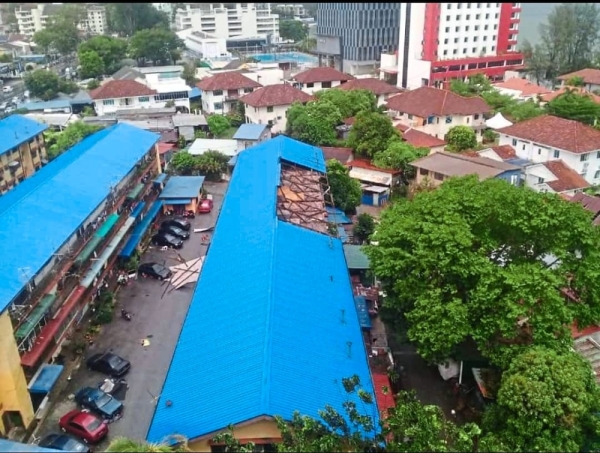 Roofs ripped off: Zinc sheets scattered after the storm at the UDA flats near Tanjung Tokong.

“It was drizzling earlier but the strong winds and rain hit suddenly.

“The roof of my house flew off towards our neighbour’s house and now, we will have to get it fixed,” she said.

For roadside stall owner Mohd Firdaus Azahar, it had been a usual day at work when his stall was suddenly blown away by the wind.

Mohd Firdaus, who sells drinks from 11am to 10pm, said there were two customers at his stall during the incident.

“It started raining heavily at around 2pm and the wind was very strong.

“Luckily, the customers left when the stall was blown away,” he said, adding that he and his friends later helped to remove the zinc sheets from the main road.

“The glass on the bus stop opposite our stall along Jalan Tanjung Tokong was also shattered by the wind,” he added. 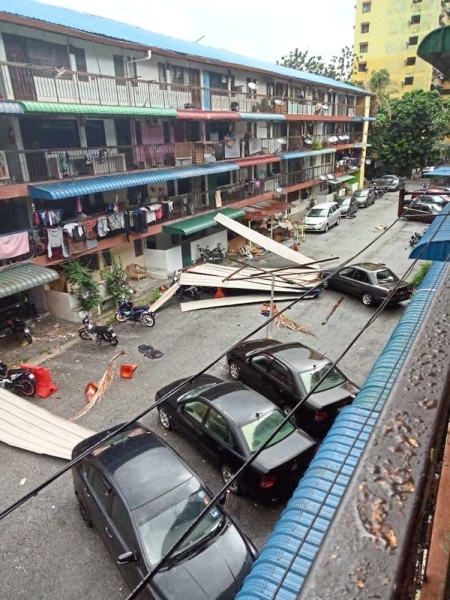 UDA flats resident Mohd Solihi Yusoff, who had been living in the area for over 10 years, said this was the first time he saw a waterspout.

“I saw the strong winds coming in the form of a spiral. It was very frightening. I was hiding at home as I did not know what to do.

Waterspouts in Penang are weak and dissipate in less than 30 minutes, unlike at vast plains beside the sea where they can reach tornado speeds.

They usually have winds of less than 30 metres per second, which is around 10 times less violent than tornadoes.

Confirming that it was a waterspout, atmospheric physicist Dr Yusri Yusup said tornadoes have never happened in Malaysia.

The Universiti Sains Malaysia scientist said a typical waterspout had a wind speed of about 70kph at a distance of 50m from the vortex.

“If you are inside the vortex, then it can be a little dangerous because the winds can go up to 288kph.

“However, the average waterspout is only about 40m in diameter,” he added.

In comparison, a tornado can be over 1km in diameter with wind speeds of over 500kph.

Yusri said that waterspouts were formed in the same way as tornadoes.

He said readings from the weather station at the Centre for Marine and Coastal Studies in Teluk Bahang showed that while it had been warm for the past few weeks, the air was unusually humid, adding that these were the perfect ingredients for a waterspout as soon as the air cooled.

The visible lifespan of a waterspout, he said, was usually less than 15 minutes and that during landfall, it would suck in warmer air into its vortex and simply dissipate.