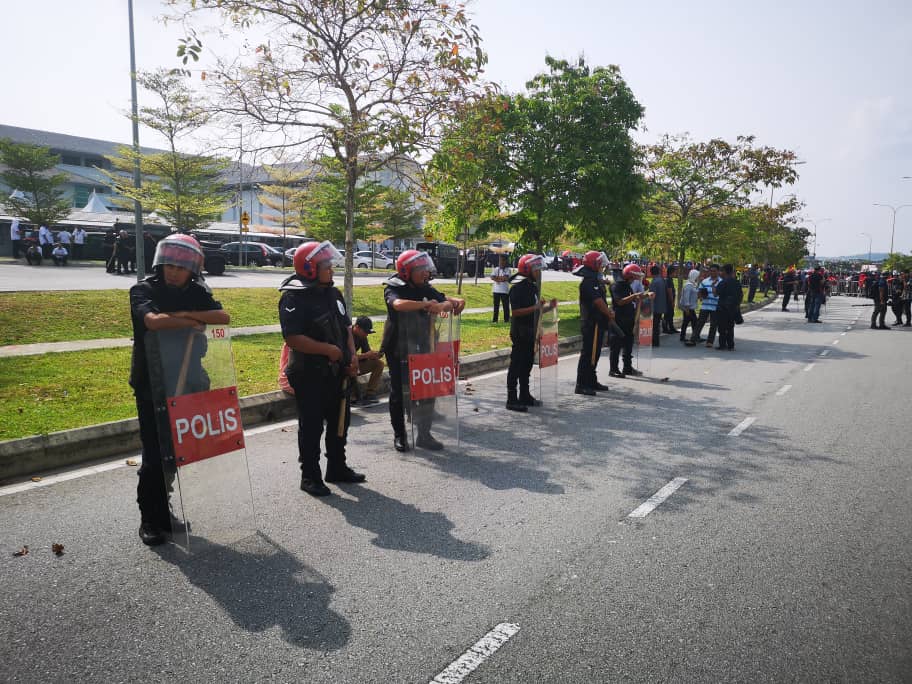 10.25am: Police tighten up security barriers between supporters as FRU is on standby. Both sides try to rile each other up with shouts and a commotion erupts when a BN supporter crosses the barriers to try and take footage of Pakatan supporters. BN supporter told to return by police. 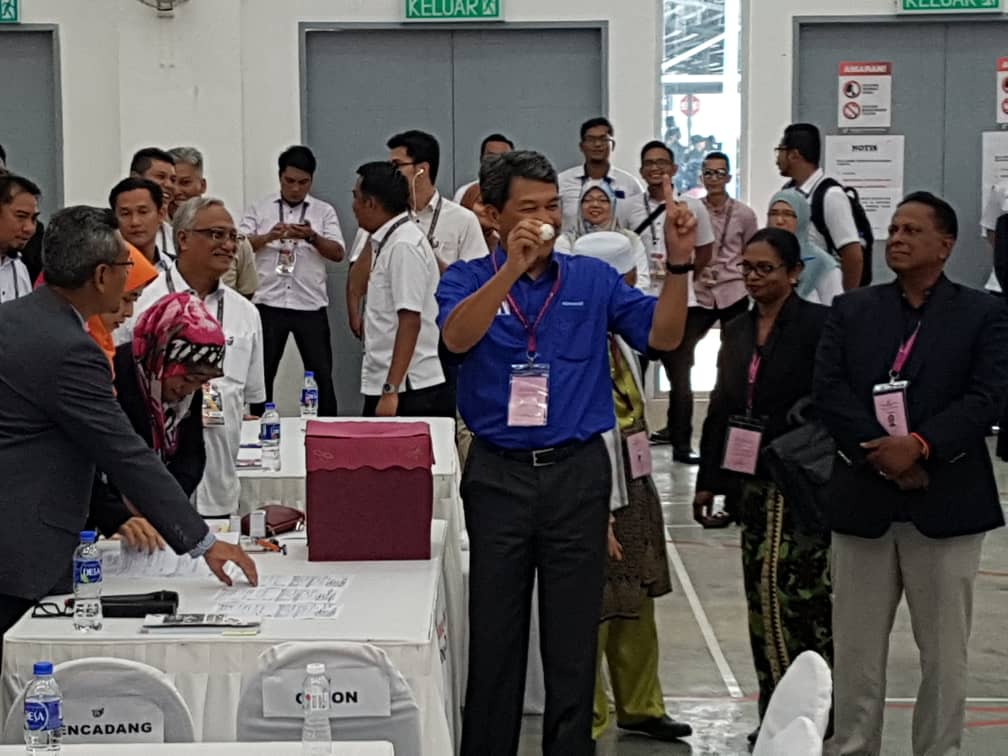 10.15am: After nominations close, the candidates were called in to pick their position on the ballot paper. Datuk Seri Mohamad Hasan's name will appear first, followed by Malar Rajaram, Mohd Nor Yassin and, finally, Dr S Streram. 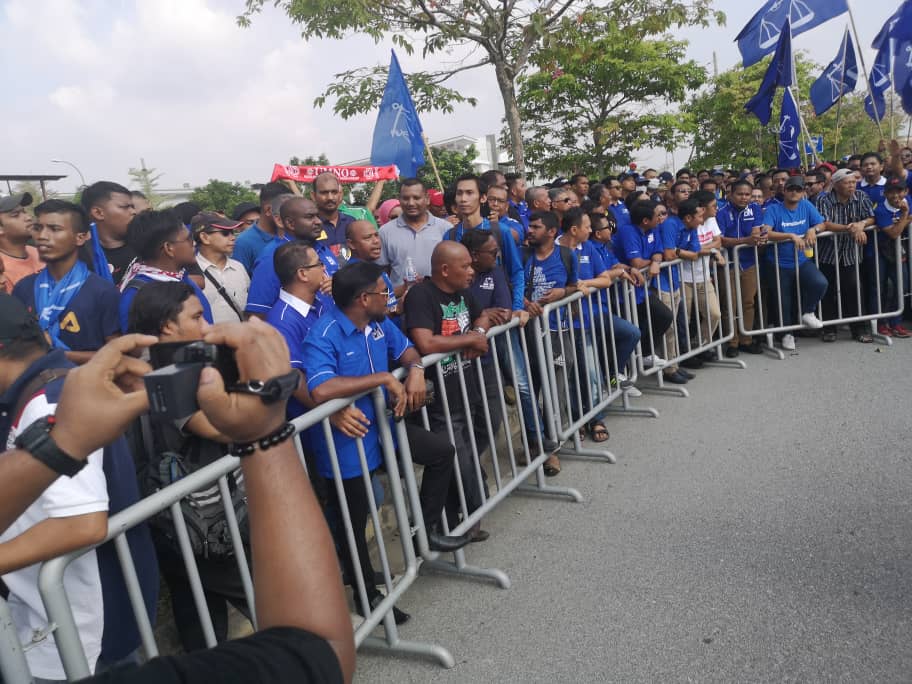 10.10am: The lull outside the nomination centre at SJKC Bandar Sri Sendayan was broken by vigorous shouts of "reformasi" and "lawan tetap lawan" from Pakatan supporters minutes after the closing time for the submission of nomination papers. Situation starts to get tense as supporters from both sides start provoking each other with party slogans. Police try to pacify the BN crowd which has gotten worked up and also warn BN supporters who breached safety perimeters. 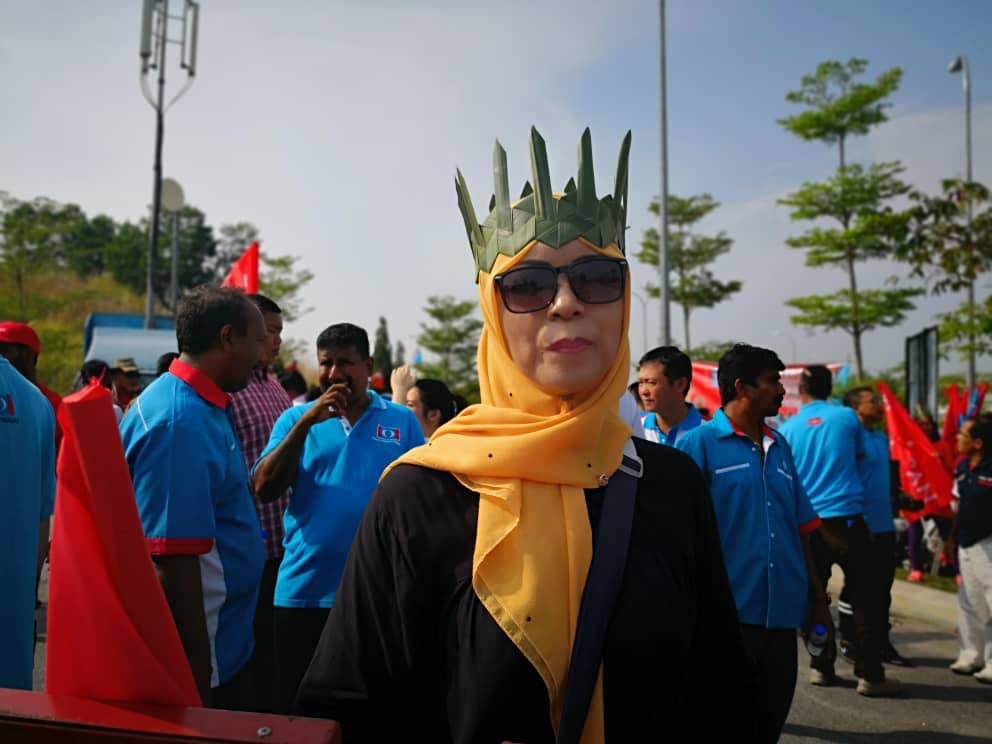 10.05am: Pakatan supporters from various ethnic backgrounds wearing headdresses made of coconut leaves turn heads outside the nomination centre. Nur Izzni Rodiah (pic), who is from the Semai orang asli tribe, said the wreaths were traditional headdresses worn by her people on special occasions. "We came all the way here from Perak to support Dr Streram because we are confident that he has a chance to win," said Nur Izzni, who is the head of the Majlis Pengurusan Komuniti Kampung Orang Asli Pengkalan Daun Teluk Intan, Perak.

10.00am: Nomination period for the Rantau by-election has just closed. Four candidates have filed nomination papers - Barisan Nasional's incumbent Datuk Seri Mohamad Hasan, Pakatan Harapan's Dr S Streram and independents Malar Rajaram and Mohd Nor Yassin. Two other Independents Hazan Khalid and Tandiko Dalusin, who had indicated a desire to contest earlier, failed to show up. The official candidate announcement would be made at 11am. Also present to observe the proceedings was Election Commission chairman Azhar Harun.

9.50am: With 10 minutes to go, the number of candidates who have filed their papers remains at four. The Election Commission will officially announce the names of eligible candidates at 11am.

9.40am: Opposition friendly group Sedar selling stickers with clownish caricatures of the current Cabinet ministers to raise funds for May 1 "Apa sudah jadi?" rally. "We are asking what has happened to our palm oil, our finance and our education," said a Sedar leader. Meanwhile, a Rantau Umno leader was heard telling BN supporters, "They (Pakatan) are talking about flying cars. What is sure is we will make them fly out of Rantau."

9.35am: BN supporters outside the nomination centre are in high spirits. Air Itam Wanita Umno member Sayah Shukor, 54, says, "Tok Mat boleh menang 100% (Mohamad can win 100%). Umno has been fighting for us since Independence. The PH ministers seem to be like primary school kids in Parliament. I am sticking to Umno." 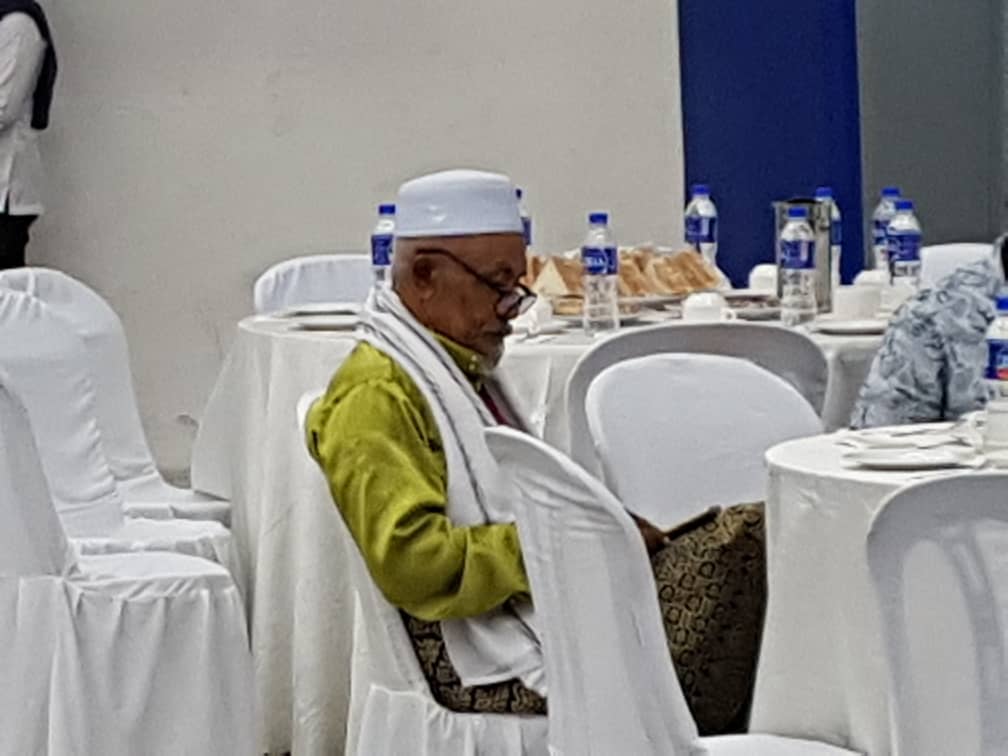 9.15am: About 300 BN supporters of all races wait outside the nomination centre as they listen to speeches. PAS leaders present include secretary-general Datuk Takiyuddin Hassan, vice-president Idris Ahmad and Terengganu Mentri Besar Dr Ahmad Samsuri Mokhtar. 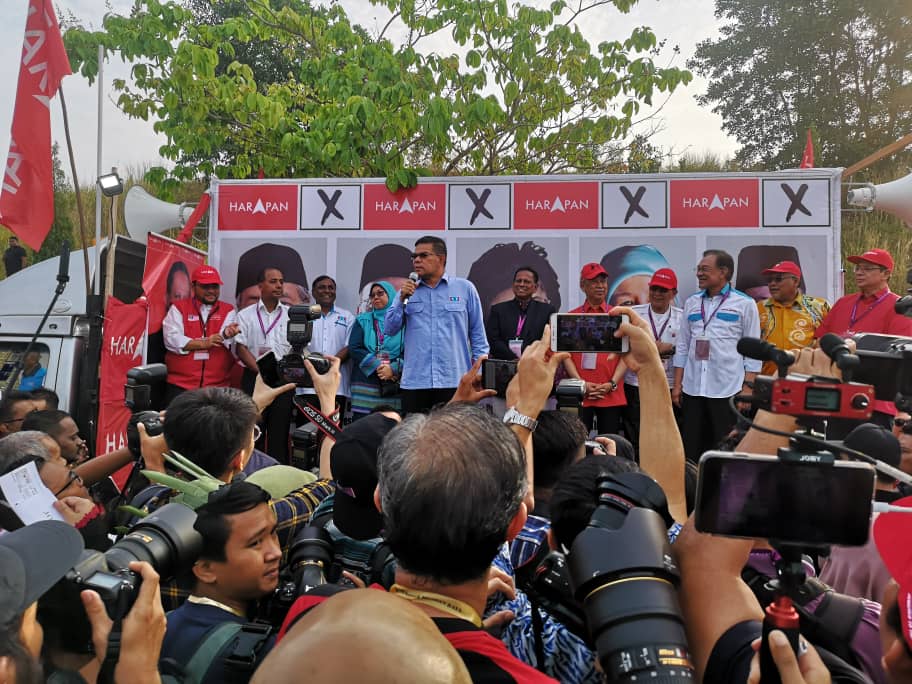 8.30am : Pakatan Harapan supporters in blue and red now number in the hundreds but are a mostly subdued crowd compared to the BN supporters. 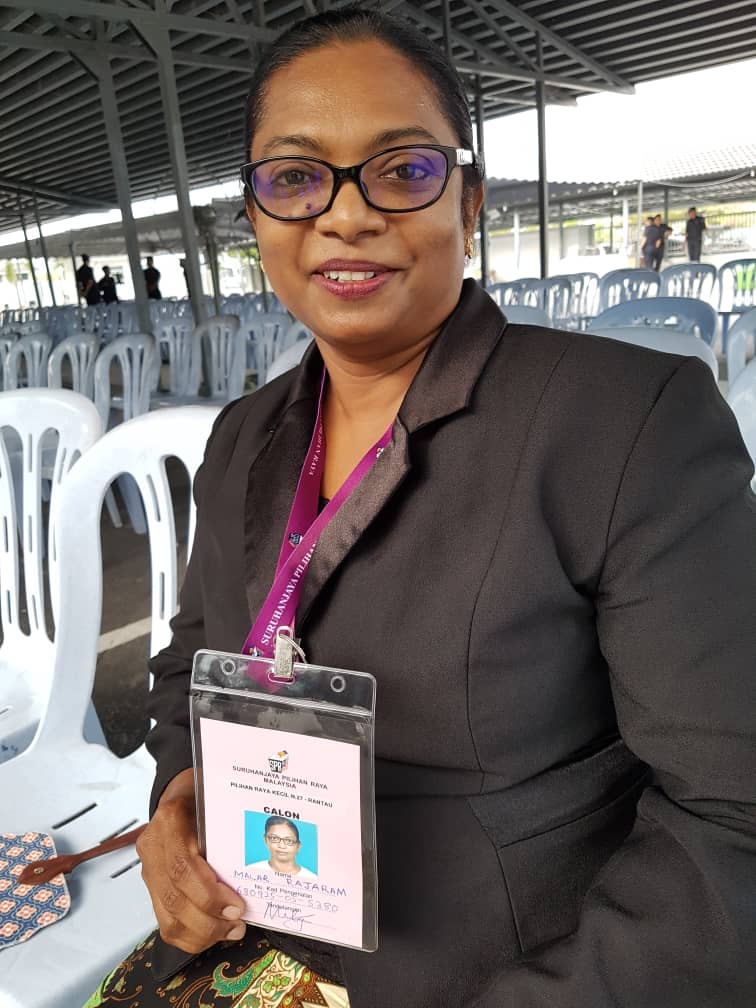 Malar Rajaram
8.15am: The first candidate to arrive at the nomination centre is Malar Rajaram, who will be contesting as an independent. The 51-year-old from Kg Ganapathy here can speak Bahasa Malaysia, English and Mandarin and spent 25 years in Toronto, Canada. She is married and worked as a radio host and producer for 15 years while abroad. The housewife, who is the fifth of eight siblings, said she returned to Malaysia  to take care of her aged mother, who passed away in 2017.
8.15am: PAS makes its presence felt as its supporters in green gather together with BN supporters about 100m from the entrance of the nomination centre. Shouts of 'Allahuakbar' heard from the crowd. 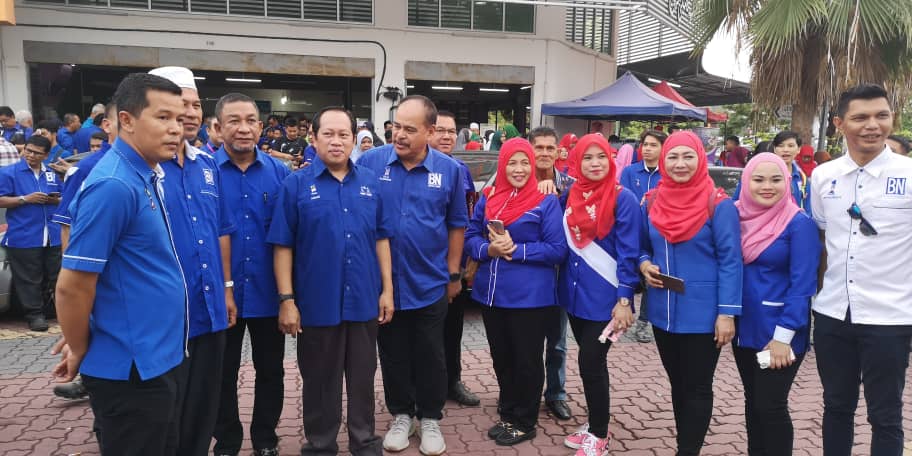 Datuk Ahmad Maslan (fourth from left) is among the BN supporters and representatives seen at the nomination centre.


7.45am: An early crowd gathers in anticipation of nomination at SJKC Bandar Sri Sendayan in Rantau, with more than 100 Barisan Nasional supporters, mainly from Umno in the signature blue shirts while others sport Tok Mat T-shirts. No signs of supporters wearing the red of Pakatan Harapan

RANTAU: The Rantau by-election gets underway, beginning with the nomination process at SJKC Sri Sendayan here on Saturday (March 30) morning.

The Rantau by-election was triggered following a Federal Court decision to uphold an earlier ruling by the Election Court to nullify the results for Rantau.

In GE14, Umno deputy president Datuk Seri Mohamad Hasan won the state seat unopposed after Dr Streram was denied entry to submit his nomination papers as he did not have a tag or a pass.

Election Court judge Azimah Omar allowed Dr Streram's petition for a by-election on the grounds that Mohamad's election victory was not valid.

The Rantau polls is the seventh by-election post-GE14, and the third to be held in 2019 after Cameron Highlands and Semenyih.