The dog ate my homework? Najib's SRC trial postponed after lawyer Shafee injured by his pet

PUTRAJAYA: A hearing on the appeal filed by Datuk Seri Najib Tun Razak relating to his criminal charges involving SRC International Sdn Bhd funds has been postponed to Friday (March 15) due to an injury suffered by the former premier's lead counsel, Tan Sri Muhammad Shafee Abdullah.

Muhammad Shafee told a three-man panel at the Court of Appeal that he could not continue with his submission for the day as he recently fractured his left wrist.

"My pet dog jumped on me. I am now in pain and I need to seek immediate medical attention later through an X-ray scan," he said here on Tuesday (March 12).

Attorney General Tommy Thomas stood up to object the postponement.

He said his office was under public pressure for Najib's trial to begin as soon as possible.

"Everyone wants the trial to start as early as tomorrow. There is an enormous pressure on the prosecution team.

"In fact, there is a global pressure on us for the trial to start. I understand the counsel has a problem but on the other hand, we are under scrutiny why the trial hasn't begun," Thomas said.

Muhammad Shafee then suggested the hearing to continue on Friday as Thomas was not available on Thursday.

Court of Appeal judge Justice Zabariah Mohd Yusof, who chaired the panel, agreed to the suggestion.

The Court of Appeal was scheduled to hear four appeals by Najib related to his SRC International case.

On Wednesday (March 11), the appellate court heard submissions on his application for a gag order to prohibit the media and the public from discussing the merit of his criminal cases; his application for the recovery of documents and statements; withdrawal of certificate of transfer and his challenge on the appointment of lawyer Datuk Sulaiman Abdullah as the lead prosecutor in his seven charges pertaining to SRC International. 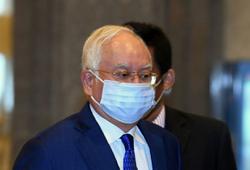