Sense of security: The government must make good on their commitment to tabling laws that safeguard women’s rights.

PETALING JAYA: Although Malaysia has yet to achieve 30% women’s representation in politics, women activists say there is progress we can celebrate on International Women’s Day today.

“We have more women in Cabinet (19%) and Parliament (14%) than we have ever had. We also have women ministers such as Yeo Bee Yin as the Energy, Technology, Science, Environment and Climate Change minister and Teresa Kok as the Primary Industries minister,” says Women’s Aid Organisation’s advocacy and communications officer Tan Heang-Lee.

She added that the government’s commitment to tabling laws that safeguard women’s rights and protect their welbeing was another positive development for women in Malaysia.

Women’s Centre for Change (WCC) in Penang is also pleased with the proposal to enact a new law on sexual harassment as well as the recent amendments in the Law Reform (Marriage And Divorce) Act 1976 which came into force last December.

“Among others, we are glad that there is now a clear requirement that children be maintained until the completion of their higher education – a provision which would go a long way in helping women, in particular, who are often the most impacted when it comes to maintenance of children,” says WCC programme director Karen Lai.

This year, Sisters in Islam (SIS) is celebrating the increased awareness and interest among Malaysian women about their rights.

“We also celebrate the openness of Malaysia Baru and its willingness to have conversations and dialogue about according and upholding the rights of Muslim women in Malaysia,” says SIS communications manager Majidah Hashim.

Tan adds that there is also a rise in women organising and mobilising to advance women’s rights in various parts of the country such as the Women’s March that will take place tomorrow in Kuala Lumpur and Kota Kinabalu.

“Women’s ability to organise, build movements and be visible is an important part of democratic participation and something to be celebrated,” says Tan.

Majidah added that even though there has been some effort put into trying to close the equality gap between men and women by introducing initiatives like i-suri, the government still had “a long way to go” in addressing “systemic gender inequality in the country”.

“The lack of female representation at government level has led to many women’s issues being sidelined or not being addressed at all. Issues such as child marriage, female circumcision, polygamy and the moral policing of women’s clothing remain prevalent in Malaysia. We even see the emergence of new issues such as the caning of women under Syariah law.

“We urge the government to raise the standards of women’s rights in Malaysia by considering the concluding recommendations of last year’s Convention on the Elimination of All Forms of Discrimination against Women and Universal Periodic Review on human rights.

“The government must not drag its feet on important issues like child marriage and marital rape,” she said.

The Star Media Group’s WOW-Women Do Wonders campaign is back for a third year in celebration of women. Read StarLifestyle for more stories.

Woman stages own robbery to make away with company funds 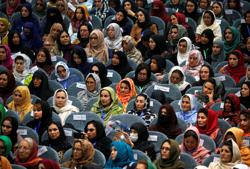 In the name of the mother: Afghan woman wins recognition, sparks Taliban opposition