The leaders said they would continue working together to commercialise the Commercial Arrangement Area (CAA) discoveries as soon as possible through the CAA and Production Sharing Agreements (PSA), it said in a joint statement on Tuesday (March 5).

The cooperation is between Petronas and the Brunei National Unitisation Secretariat under the Malaysia–Brunei Darussalam Unitisation Joint Working Group on activities related to the Kinabalu West NAG (KN) and Maharajalela North Fields (MLJ), and Gumusut/Kakap (GK) and Geronggong/Jagus-East (GRG/JGE) fields.

They also welcomed the positive progress made by the joint technical committee on the demarcation and survey of the land boundary between Malaysia and Brunei.

Both countries have agreed not to undertake activities in areas, where joint demarcation and survey has yet to be completed, it said.

It added that they looked forward to the convening of the Malaysia-Brunei Land Boundary Committee at the earliest possible opportunity to discuss the findings of the joint technical committee.

The leaders expressed satisfaction at the continued progress in trade and investment cooperation, particularly with Sabah and Sarawak and urged for more synergy in economic cooperation and promotion in the areas of transport and infocommunications, energy, tourism, agriculture, livestock and fisheries.

They also noted the engagement between the relevant officials on matters related to immigration cooperation, including the Brunei-Malaysia Frequent Traveller Programme, which has eased travel between both countries and enhanced people-to-people connectivity.

They have expressed their satisfaction with the existing bilateral cooperation in defence between the Malaysian Armed Forces (MAF) and the Royal Brunei Armed Forces (RBAF) in maintaining peace and stability, in light of the security challenges and threats in the region.

"The leaders were also pleased with the close cooperation between the MAF and the RBAF as well as commended the admirable efforts of their personnel in contributing towards the maintenance of international peace and stability, particularly under the ambit of the United Nations Interim Forces in Lebanon (Unifil) and the International Monitoring Team (IMT) in Southern Philippines," it said.

Dr Mahathir also congratulated the Brunei Sultan on the occasion of Brunei's 35th National Day on Feb 23 while the Sultan congratulated Malaysia on the proclamation of inauguration of the Yang di-Pertuan Agong Al-Sultan Abdullah Ri'ayatuddin Al-Mustafa Billah Shah as Malaysia's new King.

The leaders also agreed to hold the 23rd Annual Leaders' Consultation in Brunei in 2020. 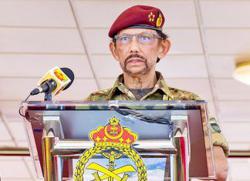