Inspiring show: Ola Bola: The Musical is about the Malaysian football team that qualified for the 1980 Olympics.

I HAD the privilege of watching Ola Bola: The Musical at Istana Budaya recently. Reams have been written regarding the role of the arts in society, and about the musical and film of the same name, but I do think I owe it to the hardworking and impressive talents involved in the musical to share some of my thoughts regarding the show.

If you haven’t seen it already, Ola Bola: The Musical – based on a 2016 film with the same name directed by Chiu Keng Guan – is about the Malaysian football team that qualified for the 1980 Olympics. It is an amalgamation of nostalgic reminiscences and hard-hitting social references, packaged in the story of a group of idealistic young men who put aside socioeconomic differences to reach a common goal.

It is a very Malaysian show; the fact that a multitude of languages are used interchangeably (and understood) without the need for subtitles is a testament to the rich broth of culture and history that we share as a nation.

It is this unity and sense of purpose that is often taken for granted, and is worryingly being more associated with times gone by.

One of the concerns many had with the onset of ‘Malaysia Baharu’ last year was that if expectations (and promises) were not met after the initial “honeymoon” period, the political narrative will take on a tone that is more right-wing and extremist in nature. With increasing press freedom, there is also the opportunity for voices that were hitherto in the fringes to attract the spotlight on themselves.

With by-elections, we see some of these examples in display. The barrage of attacks on the race and ethnicity of individuals is a common example. The usual boogie men are used to scare those who would like nothing better than to earn a decent wage. Cries lamenting the weakening of the race and calling for the action to avert an existential crisis are heard across the hallways. 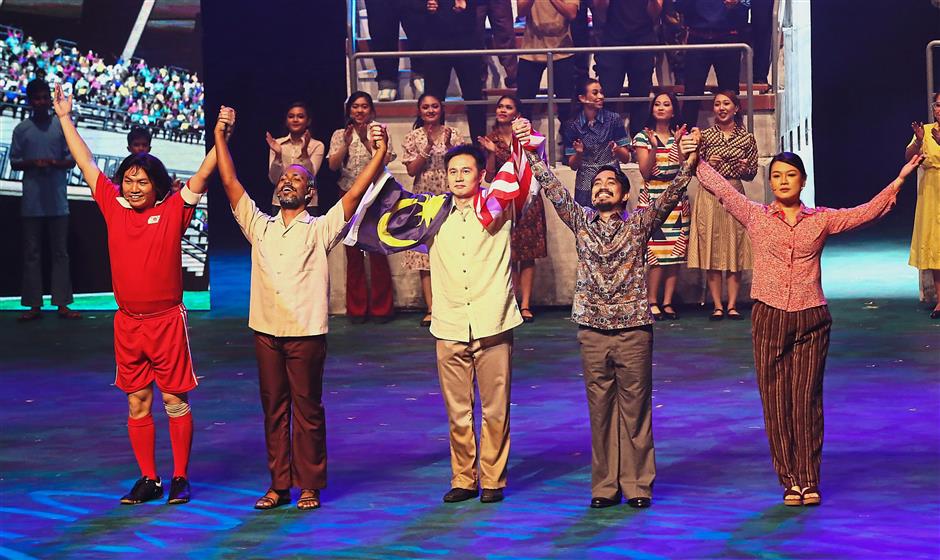 Standing united: Ala the musical, in which the characters relied on each other’s strengths whie supporting each other through moments of weakness, we must look after each other and prevent domestic and foreign elements from destroying the nation that we love.

Statements that are purportedly Islamic are bandied about without thought of consequence. Lying is now deemed acceptable for some, and one particular individual has even gone so far as to say that deaths among the current ruling coalition are a sure sign from God that the Rakyat made the wrong choice.

Race and religion are potent tools that are often wielded with the short-term aim of political victory, and in some cases the long-term ideological aim of dragging society away from the centre. A society that does not have a shared vision of where it is going is especially ripe for the picking. A population that is anxious about the future, about the ability to put food on the table may not have confidence in the people that run the government.

Sometimes this is true of Malaysia in particular – a line in the musical wryly notes that “Inilah orang Malaysia – tak pernah yakin kat negara sendiri” (This is so Malaysian – they never believe in their own country.)

The people have always been the victim of those with vested interests, and those who are willing to sacrifice the bonds that hold us together in favour of positions that best suit them. It has been the case for centuries, and will continue to remain so for as long as we submit meekly.

Ola Bola showcases how this should not necessarily be the case. When the going gets tough, the path of least resistance may appear to be the most attractive but is often not the right one. In the musical, the characters relied on each other’s strengths whilst supporting each other through moments of weakness.

The key is to not just tolerate differences, but to respect, appreciate and celebrate those differences. It is when we appreciate each other and understand what we stand for that we will do what is necessary to help each other. No matter how difficult the circumstances, we must not withdraw into the nationalistic and fascist tendencies that the world appears to be embracing today. We must look after each other – ala the #icoveryou hashtag in Ola Bola – and prevent domestic and foreign elements from destroying the nation that we love.

Our politicians have a responsibility of ensuring that they do not wedge in antagonistic swords into the equation. As for the government – they should get on with the job of governing, and send a clear message to the rakyat that they have a vision of where we are going next. Otherwise, it will be more than just the next election that is lost.

Dr Helmy Haja Mydin is a respiratory physician with an interest in socioeconomic affairs.