KUALA LUMPUR: It is MCA 2.0 from now on as the party rebrands itself to take on new challenges while working towards achieving greater heights, said party president Datuk Seri Dr Wee Ka Siong.

“The significance of MCA 2.0 is not just about facing new challenges but also for us to achieve greater heights,” said Dr Wee to a packed hall at Wisma MCA here when opening the party’s 70th anniversary celebrations.

Themed “Provide checks and balances, prioritise public opinion”, it highlights MCA’s role as an effective opposition to check on the government while continuing to raise issues concerning the rakyat.

Dr Wee also announced that the party is coming up with government monitoring groups to check on all government ministries. 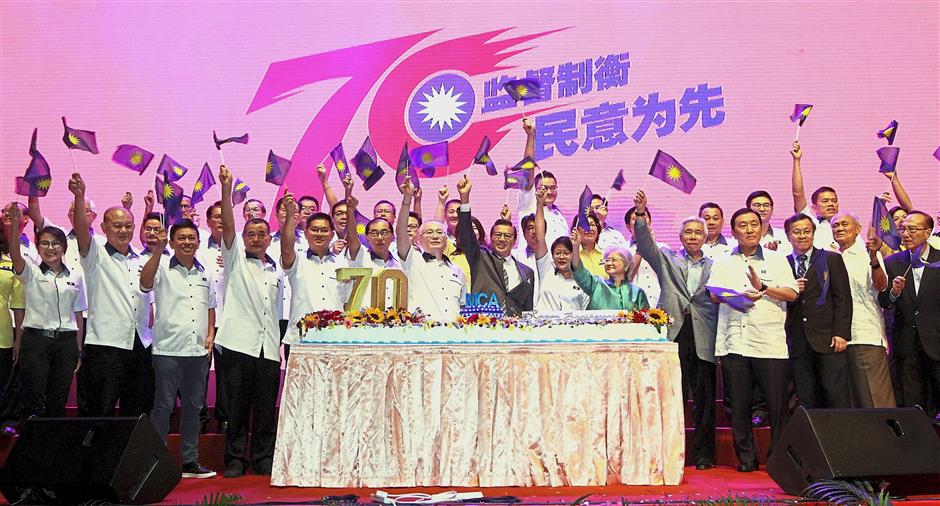 70 years on: Dr Wee (centre) is flanked by Dr Mah and Datuk Seri Liow Tiong Lai and other party leaders and veterans at the celebrations in Kuala Lumpur.

Others are health and environment, telecommunication and multimedia as well as women, family and community development.

The remaining two are inter-ethnic harmony as well as youth and sports.

Dr Wee stressed that the spirit of MCA 1.0 – which emphasised on loyalty to the country and people – will always remain.

He added that party leaders and members will continue to draw inspiration and strength from its predecessors.

Set up on Feb 27, 1949, as a welfare body to protect and take care of the Chinese community in a then turbulent era, MCA has had its ups and downs.

It was officially changed to a political party in 1951, and its founding president Tun Tan Cheng Lock declared that the Chinese-based MCA will take care of all races, he said.

MCA together with Umno and MIC formed the Alliance which gained independence for the nation in 1957. The coalition was renamed Barisan Nasional in 1974 and included other parties.

Having been part of the ruling coalition until the general election last year where Barisan lost federal power for the first time, Dr Wee said MCA was more than a ruling party.

He said it was a political organisation that fought against the British colonial government to protect the rights of Malayans. The party, he added, had also fought the communists and Malay extremists.

“In order to protect our comrades in the Chinese new villages, MCA members went into battle against armed communists.

“Even our founding president Tun Tan Cheng Lock almost lost his life in a hand-grenade attack,” Dr Wee said of the party’s struggles.

Fast track to the present, Dr Wee said MCA is an Opposition party that is “most loyal to His Majesty and also loyal to the democratic system”.

Dr Wee, the Ayer Hitam MP and the party’s sole MP, has emerged as a much respected opposition MP in the last 10 months.

The party has been monitoring and providing checks and balances on the Pakatan Harapan government on a wide range of issues.

These include raising concerns about the devastating effect of plunging oil palm prices on smallholders, foreign workers’ levy, abolition of the death penalty and criticisms against spending public money to develop the third national car project.