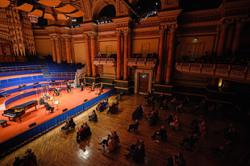 Graphic used for illustration purposes only

PETALING JAYA: A Chinese tourist was hurt when she fell victim to a snatch thief near the Kuala Lumpur Convention Centre (KLCC) along Jalan Ampang.

Dang Wangi OCPD Asst Comm Shaharuddin Abdullah said that in the 3pm incident on Friday (March 1), the woman and a friend were walking along the road when a man on a motorcycle darted in, yanked her handbag and sped off.

"The woman fell hard on the pavement due to the incident and suffered injuries to her head and face.

"She was rushed to Hospital Kuala Lumpur for treatment," he said in a statement Sunday (March 3).

The victim's friend later lodged a report over the incident.

ACP Shaharuddin said both women were not able to get the licence plate number of the motorcycle.

"The victim’s handbag contained her passport, wallet, house keys and some Chinese currency," he said.

He added that police were reviewing CCTV footage from the area to identify the suspect.