The Prime Minister said on Wednesday the National Policy on Industry 4.0 known as Industry4WRD was Malaysia

PETALING JAYA: Despite talk of a no-confidence vote being planned against Tun Dr Mahathir Mohamad from inside Pakatan Harapan, it will be very tough to get enough MPs to pull off such a move, says a constitutional law expert and several political analysts.

Unlike Parliamentary Bills, which can be passed with only a simple majority of the MPs present in the Dewan Rakyat at the time of voting, a motion of no confidence against the Prime Minister will require an absolute majority, that is, support from at least 112 MPs in the 222-seat Dewan Rakyat.

In addition, with the MPs organised into many coalitions and blocs, anyone who wants to push through a no-confidence vote will have to cut a lot of deals and make many promises in order to get the numbers needed.

Constitutional expert Assoc Prof Dr Shamrahayu A. Aziz said there is no specific provision covering a motion of no confidence against the Prime Minister but the Federal Constitution allows for the situation to arise in Parliament.

She said Article 43(4) of the Constitution states that unless the House is dissolved, the Prime Minister as well as his Cabinet have to resign if the Prime Minister no longer commands the confidence of the majority within the Dewan Rakyat.

“The Constitution is silent on the definition of what constitutes a majority in Dewan.

“But as a matter of practice and from a previous court decision, the majority means an absolute majority – that is, the majority of all members of the Dewan Rakyat (a minimum of 112),” she said.

Universiti Malaya political analyst Dr Muhammad Asri Mohd Ali said it will be tough for anyone to get the minimum 112 votes.

“It’s not easy because we have various coalitions and parties and the MPs are from various regions, namely the Peninsula, Sabah and Sarawak.

“Everyone you approach for support will make demands and seek guarantees in exchange for support,” said Muhammad Asri.

Apart from the ruling Pakatan, which has 125 seats, other coalitions include Barisan Nasional (40), Gabungan Parti Sarawak (19) and Gabungan Bersatu Sabah (three).

Sabah has two Pakatan-friendly parties, namely Parti Warisan Sabah, which has nine MPs, and Upko, which has one.

There are seven independent MPs in the Dewan Rakyat. 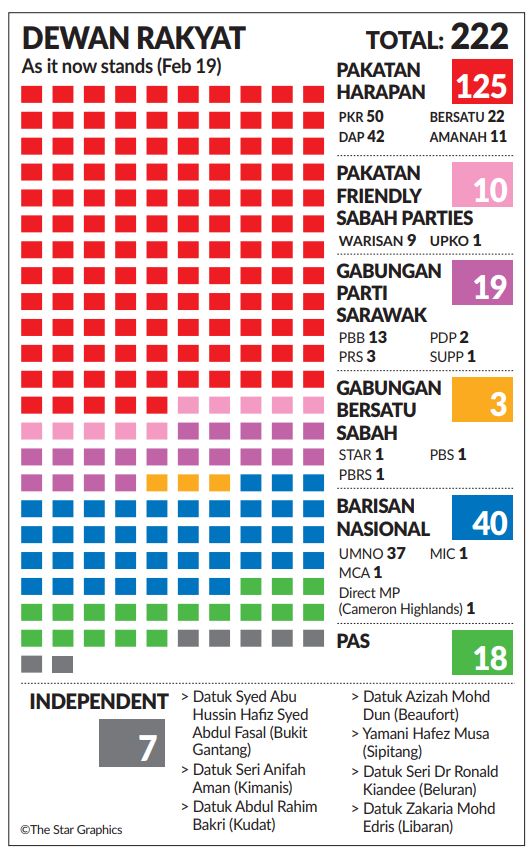 A recent statement by PAS, which has 18 seats, that it will support Dr Mahathir in the event of a no-confidence vote, has fuelled speculation that a plot is brewing within Pakatan to oust Dr Mahathir via such a vote.

There is also talk of Umno, he added, having two rival groups – one in support of Dr Mahathir remaining as Prime Minister and the other preferring Anwar to move up.

Muhammad Asri said speculation that former Umno vice-president Datuk Seri Hishammuddin Hussein had a hand in the exit of six Umno MPs who later joined Parti Pribumi Bersatu Malaysia (Bersatu) raises questions about how many more he would be able to draw out to support Dr Mahathir.

“We must also consider MPs in Umno and other parties who prefer not to show who they support in the event of a no-confidence vote, right up till the last minute,” said Muhammad Asri.

Political analyst Assoc Prof Dr Jeniri Amir from Universiti Malaysia Sarawak said those who want to motion for a no-confidence vote against Dr Mahathir may even seek the backing of Umno president Datuk Seri Dr Ahmad Zahid Hamidi and his supporters.

“It must be remembered that Ahmad Zahid was a strong supporter and friend of Anwar before the latter was sacked by Dr Mahathir in 1998,” said Jeniri.

Another political analyst, Shukri Shuib from Universiti Utara Malaysia, said a no-confidence vote against the Prime Minister from within Pakatan would go against democratic values.

“Even if Pakatan wants to change the Prime Minister, they should do it internally instead of dragging it out into the open at the Dewan Rakyat,” he said, adding that such a move could create political instability in the country.

Mohd Zuki: All govt resources to be used in managing Covid-19 during Emergency
Kiandee: About 60% of companies with AP to import meat are bumiputera-owned
EC to display Q4 2020 electoral roll at 910 locations
RM150mil to repair roads, bridges damaged by floods in Sabah
Unhealthy culture creeping in Umno could affect party, says Mohamad
Walks around the village turn costly for two men under quarantine in Sabah
Khazanah and Petronas should expedite purchase of laptops, says Najib
Scammers impersonating friends or family to cheat people in PJ, say police
Terengganu MB thanks Selangor govt for RM500k contribution for flood recovery efforts
Vell Paari: MIC has no problems with PAS, has issues with ‘arrogant behaviour" of Kedah MB