A group of activists in Ipoh, Perak are trying to put up a memorial plaque near Gunung Cheroh where dozens of people were killed in a rockslide 46 years ago, Makkal Osai reported.

More than 20 houses, shops, and cattle pens in Kampung Kacang Putih located at the foothill were destroyed or buried under the rock-slide.

The largely Indian community, who were famous for the Ipoh kacang putih snacks, relocated from the area following the Oct 18, 1973 tragedy which occurred one week before Deepavali.

One of the activists who was identified as Arumugam said the community was making an effort to put up a marker to remember family members and relatives who died in the tragedy.

He said they were also trying to get assistance from the state government to put up a plaque or small monument in the area.

The group has also arranged for a special prayer on Feb 24 for those who died there.

> A three-month-old baby died while attending a prayer in Tamil Nadu when a pot filled with milk accidentally fell on him, Malaysia Nanban reported.

Karutthapandiyan and his wife Gayathri were attending a temple consecration festival in Tirunelveli when the incident happened.

A pot containing milk which was to be used in the ceremony apparently came untied and fell on Gayathri and hit her son Kishore as well.

Both were seriously injured and were rushed to the hospital. The infant died on the way while the mother is being treated at the hospital.

Police are reportedly investigating the incident. 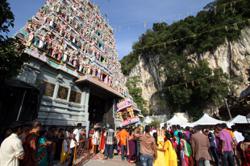