THE subject on East Coast Rail Link (ECRL) has become more exciting now – thanks to the open bickering between two senior Cabinet ministers on the fate of the suspended project.

The two Cabinet members, in the absence of Prime Minister Tun Dr Mahathir Mohamad, appeared to have acted in haste separately to tell the whole world that the Cabinet had decided to axe the project.

Construction of the 688-km rail project, linking the west and east coast of Peninsular Malaysia, was suspended last July after the new government led by Dr Mahathir came into power in May 2018.

The current government has alleged unfair terms in favour of China and the project’s dubious link to the 1MDB scandal.

Currently, the cost for construction of ECRL is estimated by the present government at RM81bil – much higher than the RM55bil put forth by the former administration.

Indeed, it was disappointing but entertaining to see the quarrel between Economic Affairs Minister Datuk Seri Azmin Ali and Finance Minister Lim Guan Eng in the previous week.

After Azmin announced that the Cabinet had decided to terminate ECRL because Malaysia could not afford the RM500mil annual interest payment, Lim immediately expressed “shock” and issued a statement that sounded contradictory.

Although Lim later clarified the content of Azmi’s statement was not in dispute, he did not make it explicitly clearer.

And when other ministers began to talk, the public got confused: was there a Cabinet decision to axe ECRL? Was it the decision of a few only? If there was a decision, why was the PM obstentially not aware of it? Was there a wayang kulit meant to confuse people?

Ironically, it was former PM Datuk Seri Najib Razak who stepped in to “confirm” who had signed to cancel the project. 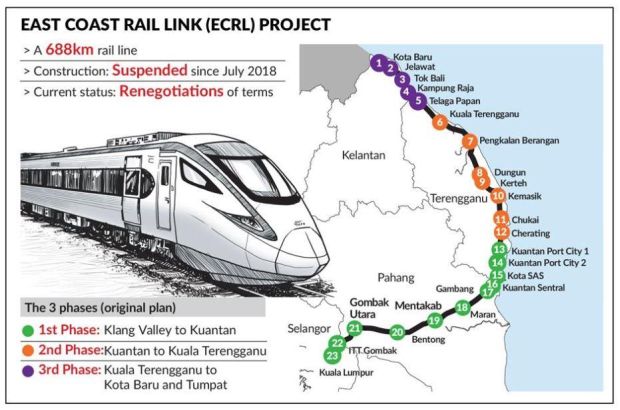 Ousted by Pakatan Harapan coalition in the May 2018 general election, Najib posted on his facebook a letter purportedly signed by Lim that indicated the ECRL project was terminated.

While everybody thought the project was gone, the return of the PM from overseas suddenly injected life and hope into the “salted fish”.

Last Tuesday, the 93-year old leader announced negotiations on the ECRL with China were still underway and a final decision has not been made, although he continued to moan about the high cost.

A gag order followed. Now, only the Prime Minister can talk about this government-to-government project.

Though imposing a gag order is undemocratic, this seems necessary – at least to keep the mouths of keen talkers shut.

There may be something cooking that the people and the China are not aware, but on the surface, it seems there was a power struggle or thirst of publicity taking place.

Daim’s reminder came timely, as many people have expressed disappointment with leaders who talk too much.

The former Finance Minister also said as ECRL negotiations involve the sensitive relationship between Malaysia and China, it “must be handled in a careful manner… sit down and do everything quietly”.

Sources had told Starbiz that news of the ECRL’s supposed termination shocked CCCC, as the latter has conceded to many demands of Malaysia, even to the extent of sharing post-construction operational costs.

The CCCC is said to be “still holding out for an amicable solution”.

It seems CCCC has agreed to bring the cost down closer to RM40bil range, compared with the original RM70bil for the entire project.

In the re-negotiations, CCCC has also agreed to allow 40%-50% local participation – up from 30% originally, sources said.

The Starbiz report was confirmed in a sources story reported by Reuters one day later.

If this information from sources is accurate, then it makes sense for Malaysia to go ahead with ECRL – at least mathematically.

There are two key facts here: (1) ECRL is 14%-15% complete and Malaysia has already paid RM20bil for the project; and (2) If the project is cancelled, Malaysia has to pay about RM20bil or may be more for compensation.

If the renegotiated cost has now been cut to RM40bil, why do we want to cancel the project if we need to come out with RM20 billion to resume construction? And while negotiations are ongoing and the Chinese side has shown sincerity in striking out a solution, it will be inappropriate to cancel the project unilaterally without giving notice to the other interested party.

Daim’s another reminder to leaders last Wednesday that their “learning process is over now” was also timely.

After nine months of taking over the government, people have lost patience in watching “shows”.

Businesses want to see new projects launched and the economy to pick up, while the people want job security and prospects of higher income.

For those handling Chinese projects, they should have learnt by now how to deal with China, which is also our biggest investor and largest trading partner.

In China’s social media, Malaysia has been portrayed as unfriendly, lacking integrity and not honouring contracts.

On YouTube, commentators urge their government not to let compensation be reduced should the ECRL be cancelled.

Apart from paying compensation within a short period, Malaysia will be penalised for cancelling the RM30bil loan from China’s Exim Bank, according to MCA president Datuk Seri Dr Wee Ka Siong.

In the government, some Pakatan leaders have given the impression that projects implemented by the former government are bad and must be cancelled.

While nobody disputes there was rampant corruption in Najib’s government (that was why it was voted out in the last election), the correct attitude for current leaders to adopt is to objectively assess costs and benefits of each project, versus our affordability.

The implications and repercussions in terminating a project should also be taken into consideration.

Leaders should leave personal agenda and prejudices out when carrying out such task for the nation.

In the case of ECRL, the benefits to the local economy and people cannot be ignored.

The ECRL would link the Malaysia-China Kuantan Industrial Park and Gambang Halal Park in Pahang, Kertih Biopolymer Park in Terengganu and Tok Bali Integrated Fisheries Park in Kelantan with the west coast.

In an open letter to the Cabinet last week, Dr Wee said the ECRL project would boost the GDP growth of the three east coast states in Peninsular Malaysia by 1.5% annually.

Without a doubt, it will spur the development of the east coast, enhance trade and tourism, connectivity between the east and west coasts.

Given that the Karak Highway is now highly congested, particularly during the weekend, there is an urgent need for an alternative mode of transport to link the east and west coasts.

Dr Wee, a former Minister who has a deep understanding of China, warns of adverse implications for Malaysia-China relations if the ECRL project is cancelled.

Malaysia earns about RM20 billion tourism receipt from China annually. Will this be reduced? What about the mainland’s uptake of our palm oil and rubber? Not to forget are our bilateral trade and investments.

In his open letter, Dr Wee said: “I can safely say that putting a stop to the ECRL project will harm the diplomatic ties. If we put ourselves in China’s shoes, we will surely respond negatively if our overseas investment (in China) is treated as such.”

For Beijing, the ECRL is seen as a strategic key Belt and Road project in Malaysia.

With the project, China can use the rail line to bypass Singapore port and transport goods to and fro from Indonesia and India via Port Klang-ECRL-Kuantan Port.

It does not take an expert eye to see that the resulting increase in overland trade will benefit Malaysia too.

At the start of ECRL in late 2017, the project had spurred SMEs in 150 industries and thousands of contractors to spring into action.

For those who have taken loan to purchase equipment, they will suffer greatly should the ECRL be cancelled, according to Dr Wee.

If Malaysia-China ties are soured, exports of local products such as birds’ nest, Musang King durian and white coffee may be hit.

These products became the hot items for Chinese tourists and their market when Malaysia-China relations were at their highs during the past adminstration.

When bilateral relations with China take a dip, the first impact is felt in tourism. Taiwan, Korea and Japan had that experience.

Tourism players in Peninsular Malaysia are seeing a 10% drop in Chinese arrivals in the coming Chinese New Year holiday season, after experiencing a 30% fall in the October China National Day golden week.

Historic Melaka, a must-visit for Chinese, has seen a 20-30% decline in tourism lately, according to Melaka Tourism Business Club.

The government cannot ignore the plight of these small traders and players, and their livelihood.

It has taken 45 years for Malaysia and China to build a strong foundation in bilateral relationship, hence the government should work with China to achieve a win-win situation for the benefit of their peoples.