GEORGE TOWN: The golden and silver chariots began their journey 90 minutes apart in conjunction with the 233rd Thaipusam festival in Penang.

The Penang Hindu Endowment Board had brought in a new and bigger golden chariot this year.

More than 5,000 devotees swarmed the Little India area as early 5am to witness the placing of  the vel (spear) on the golden chariot. 
The deity of Lord Muruga was lifted on the silver chariot around 7.30am.

Nattukotai Chettiar Temple managing trustee Dr A. Narayanan said the silver chariot decided to move at 8am to give a headway to the golden chariot.

"We wanted to give the chariots and the crowd some distance for a smooth journey to Waterfall Road," he said.
Article type: metered
User access status: 3
Join our Telegram channel to get our Evening Alerts and breaking news highlights 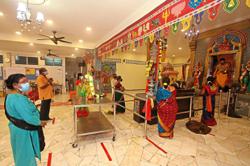