No more late nights out for young ones

PUTRAJAYA: If you’re under 18 years of age, you may not hit the streets at night past a certain time under a curfew being mulled by the government.

Authorities are mulling the possibility of setting a time limit for young Malaysians to be out of the house without adult supervision, to shield them from negative activities and influences.

Such a curfew would help prevent them from getting into trouble, particularly when it comes to drugs, authorities believe.

This was among matters raised and agreed upon at the Cabinet Committee on Eradicating Drugs meeting chaired by Deputy Prime Minister Datuk Seri Dr Wan Azizah Wan Ismail.

She said authorities were seriously considering a curfew for children under 18 as records show that glue sniffing is serious among the young.

Malaysia would not be the first country to introduce a curfew on teenagers and children, with Iceland having something similar.

“We are looking at this policy practised by Iceland.

“This is a model that we can emulate. 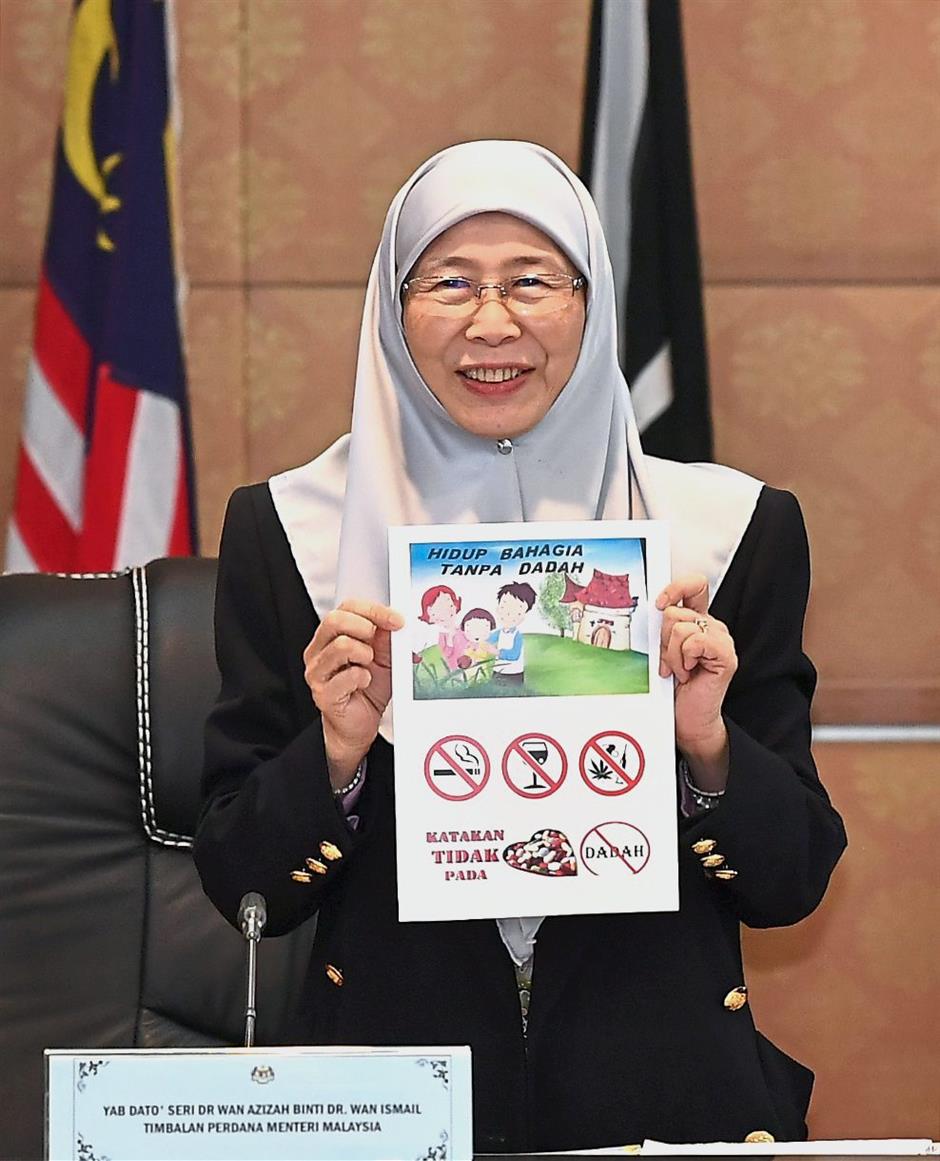 A healthy message: Dr Wan Azizah showing the anti-drugs campaign pamphlet to the media after the meeting in Putrajaya. — Bernama

“It may not be easy to implement but we feel this is necessary and can definitely help prevent young people from being involved in negative activities,” she said after chairing the meeting here yesterday.

Under Iceland’s Child Protection Act, children under 12 may not be outdoors after 8pm unless accompanied by an adult.

Children aged 13 to 16 may not be outdoors after 10pm, unless they are on their way home from a recognised event organised by their school, sports organisation or youth club.

Those who break the curfew are taken to a police station and their parents will have to pick them up there.

However, some have questioned Iceland’s law, saying it contravenes United Nations’ Guidelines for the Prevention of Juvenile Delinquency and also violates the human rights of children.

Meanwhile, the Cabinet Committee on Eradicating Drugs also discussed drawing up a law to prevent, treat and monitor abusers of psychotropic substances, including inhalants such as glue.

Dr Wan Azizah also said that a new law to deal with psychotropic substance abusers is in the pipeline, adding that this is aimed at tackling the use of inhalants and glue sniffing habits among youth.

“This is still at the proposal stage. We have yet to figure out the punitive actions as well as educational elements that we want to have as part of the law.

“But what is for sure is that we need to ensure that our future generation is not addicted to psychotropic products and glue sniffing,” she said, adding that while the habit might not look as dangerous as injecting oneself with drugs, the effect of glue sniffing is equally, if not more, dangerous.

The Cabinet Committee meeting also agreed to make it mandatory for the public to seek approval from the authorities to grow ketum.

While the planting of ketum trees is not a crime, doing this on a commercial scale, including picking and processing the leaves, has been an offence under the Poisons Act 1952 (revised in 1989) since 2004.

Ketum is used as a painkiller as well as an energy booster, but its abuse can lead to addiction.

Home Minister Tan Sri Muhyiddin Yassin recently said the growing of ketum should be banned in Malaysia because it has been abused by drug users.

Dr Wan Azizah said to encourage drug addicts to seek treatment, the committee proposed those who “check-in” into rehabilitation centres voluntarily be left out from the offenders’ registry.

“We hope this initiative will inspire them to seek help to kick their addiction, and by not registering them as drug offenders, we hope this will lift the stigma to give them a chance to have a new life and assimilate into society,” she added.