THE recent tension between Malaysia and Singapore resulted in several day tours to Johor for Chinese New Year shopping to be cancelled, reported Sin Chew Daily.

Groups of Singapore residents communities who organised these trips expressed concern over the strained relationship between both countries, and had decided to cancel the day trips to avoid any unexpected complications.

The annual day trips to Johor to shop for Chinese New Year goods and enjoy local delights had been advertised since November and seats were taken up quickly.

Fees paid by participants were fully refunded. Some Singaporean residents also said they refused to shop in Malaysia due to the recent tension of both countries.

> A 23-year-old woman was raped by a man she newly befriended via mobile application WeChat, reported China Press.

She had only known the man for seven days. The sexual assault was said to have happened in a hotel in Damansara Damai, Petaling Jaya.

The victim went on a date with the man, also 23. She said he later forced her into the hotel room he had booked and raped her.

The woman tried to escape but fearing her safety, she gave in. She confessed the ordeal to her older brother eight days later, who then confronted the man.

The man admitted to his crime and the victim lodged a police report.

> Sabah seems to be the preferred tourist destination this Chinese New Year despite the slow market sentiment on festive goods, reported China Press.

Island resorts in Sabah were fully booked and operators were unable to meet demand.

“Now, locals who travel overseas during Chinese New Year reduced by 10% on average and more prefer to travel within Malaysia for vacation,” he said. 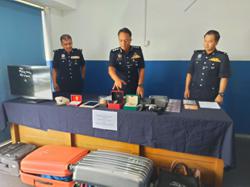