Still hoping: Smallholder Liew maintains his oil palm plot, hoping the price of the commodity will bounce back soon.

THE scorching noon sun has been keeping many village folk indoors of late.

Abdullah Ahmad, 75 and his wife Ruhmia Arif, 70, from Kampung Temahil in Yong Peng, Johor, are no different. But this time around it’s not just another dry spell, though.

“Tidak ada musim (oil palm trees are not fruiting),” says Ruhmia about how the dry spell is affecting them.

About 70% of the 100-plus households in the village are oil palm smallholders, says Abdullah, a former village chief.

They are among the 650,000 oil palm smallholders in the country who have been hit by the commodity’s falling price that began three months ago.

Likening the situation to “jatuh ditimpa tangga” (double blow), the soft-spoken elderly couple say they are at a loss about what to do with falling prices and poor yields. Double whammy: Abdullah and Ruhmia are on a tight budget thanks to low prices for palm oil and low yields of oil palm fruits from their smallholding.

On average, 0.5ha yields between 0.5 tonnes and 0.8 tonnes of oil palm fruits, and harvesting is carried out every 20 to 25 days. The estimated monthly cost to maintain 0.5ha of oil palm is RM200.

The price of the fruits, Abdullah adds, has dropped to as low as RM200 to RM220 a tonne recently, which means there is hardly any profit after deducting the labour charge for harvesting (RM70 per 0.5ha) and other costs like fertiliser, weed killer and pesticide.

But the pair count themselves lucky because Abdullah – a former Yong Peng district council worker – receives a RM1,000 monthly pension.

“Can you imagine those who depend solely on oil palm for a living?” Ruhmia asked.

They hope the government can help the suffering smallholders as soon as possible. They “rasa tertekan” (felt under stress) for the last three months, she says.

Their plight is also compounded by the rising cost of living. After paying utilities – about RM40 for electricity and RM20 for water – the couple has to strictly budget what they spend on food.

“We hardly can buy much food with RM50 for marketing these days,” she adds, reeling off the price of fish.

They grow some vegetables in the house compound to save money, too, though that tends to push the water bill up.

Ruhmia sighs that, “harga barang naik, harga sawit turun (price of goods goes up and price of oil palm goes down)” is the popular topic these days.

Abdullah, who carefully spends only RM1.10 for his cup of teh and RM1 for roti canai at a warong (stall) nearby daily to meet up with friends, says even the warong’s business is not so good.

“The usual jovial mood in the warong is less these days. Many are also adjusting to the no smoking ban and are not in the mood to stay longer and chat,” he observes.

Manickam Batumala, also from Yong Peng, says the price of oil palm fruit bunches has plunged from RM400 to RM500 per tonne to about RM270 per tonne recently. 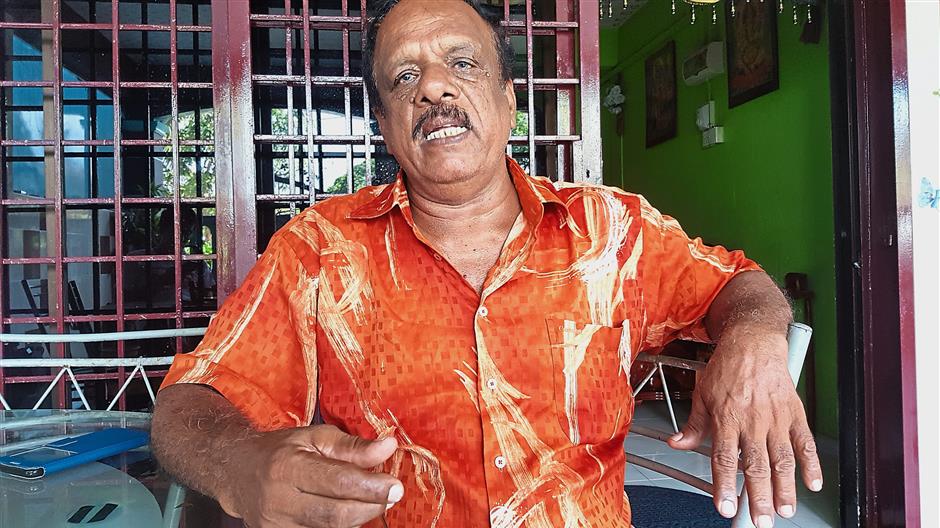 Worried: Manickam hopes the flagging economy will not have a bad impact on him.

The 63-year-old former rubber estate and oil palm plantation worker says smallholders are also hit by rising labour charges and the cost of fertiliser these days.

He used to pay a labour charge of RM60 per 0.5ha for harvesting, but his two sons now harvest the family’s 3.5ha to cut costs.

He’s in his smallholding by 8am daily to do maintenance work like cutting the grass. His sons do other jobs, including cow-rearing, as money from oil palm is not enough for household expenses.

Manickam says the government has to look for markets for palm oil instead of advising the smallholders to change to planting watermelon and banana.

“Not every piece of land is suitable for planting any type of crop,” says Manickam.

Unlike previous years, smallholder Sea Swee Chong, 75, also from Yong Peng, says he is not in any mood to prepare for Chinese New Year, which is less than a month away.

He says he and his wife, Tan Eng, in her 70s, will, however, buy prayer items and pray that the new year will bring new hope to the oil palm business.

“The price of the crop has fallen for three months already and there’s no sign of recovery. This has never happened before.

“While it was normal for prices to fluctuate in the past, they usually recovered in a month,” says Sea, who has been an oil palm smallholder for 40 years. Concerned: Never in his 40 years as a smallholder has Sea seen such low prices for oil palm fruit.

While he fears the worst – that oil palm cultivation is becoming a sunset business – Sea says he continues to take care of the trees.

He will be at his smallholding, about 8km from his home, by 7am and works for about four hours before heading home for lunch.

“I continue to do my best, and I hope the government will do its part by looking for markets for palm oil overseas.

“Please fight to help the smallholders,” he pleads.

Despite the blazing sun and his advancing age, Sea says he will struggle to maintain his rice bowl as long as he can.

“Our earnings for three months now is enough for one month’s expenses because of the continuing low price for the commodity ,” he says.

In Tronoh, Perak, smallholder Ben Liew, 60, says he keeps his 1.2ha plot in good condition with the hope that the price of the commodity will bounce back soon.

Like other smallholders, he urges the government to earnestly look for markets abroad in addition to its campaigns asking Malaysians to consume more palm oil and related products.

“I spend about three hours thrice a week working on my plot, doing grass-cutting and spreading fertiliser.

“I only hire workers to harvest and transport the fruits to the dealer,” he says, adding that he has not made any profit of late what with the current low price of the product and high labour charges (for harvesting) as well as the high price of fertiliser.

“Those who outsource all the jobs are making losses in the current market,” he adds.

In Sungkai, Perak, a smallholder who prefers anonymity says he is hardly making any money with the current low price.

He outsources the management of his holdings because he works mainly on his vegetable farm.

“Unless you have 4ha to 8ha, it is risky for a family to depend just on oil palm,” he says.

Those who do are suffering now, especially elderly people who cannot do other work, he adds.

There are many elderly who have 1ha of oil palm and depend on the earnings to survive in their golden years.

Apart from looking for markets abroad, he says there is also an urgent need to address the issue of the shortage of foreign workers to harvest the fruits. Foreign workers will opt out of Malaysia if the rules for hiring continue to be uncertain, he says.

Lee says the foreign worker shortage is a big concern in the oil palm sector, and he hopes the government will not overlook this, as it can have a huge adverse impact on the country’s economy.

Also hit by the palm oil market are related businesses, such as those selling fertilisers and pesticides.

A worker in a shop in Bidor, Perak, says his boss is feeling the pinch, as smallholders go looking for cheaper fertiliser, weed killer or pesticides to cut cost.

His shop, he says, does not sell chicken droppings.

On the whole, he says only 20% of the smallholders opt for the imported fertilisers for good trees and better yield. This group are investors who are rich and do not depend on earnings from oil palm for their living. The remaining 80% are those who depend solely, and some partially, on oil palm for their livelihood and thus are very cost sensitive. They either use local fertilisers or a mix of local and imported fertilisers to keep cost affordable.

He says the poor exchange rate has also pushed up the prices of imported fertiliser, weed killer and pesticides.

“Dealers are worried that their existing stock of fertilisers may not be able to sell in time and will spoil.

“Smallholders have been complaining about the low oil palm price for three months now and some are already having cash flow problems ,” he says, adding that people are not in the mood to talk about Chinese New Year celebrations this time around.

Do something now to help smallholders