Mukhriz said discussion on the awarding of contracts openly was not proper and in fact could be perceived as breaching the integrity and aspiration of the party.

"I feel it is not appropriate and proper for any leadership to suggest the use of position in the government to give contracts. This is not our responsibility, in fact, it has breached the aspiration given when we wanted to form the party and Pakatan Harapan government.

"That is why I support the statement by Armada on the importance of integrity in party administration," he told reporters here on Wednesday (Jan 2).

He was asked to comment on the alleged call by several Bersatu division heads who wanted Syed Saddiq to be removed for the criticism he made earlier.

Previously, Syed Saddiq, who is Youth and Sports Minister, when delivering his adjournment speech at the 2nd Bersatu Annual General Assembly in Putrajaya recently, criticised the delegates for asking for contracts to be awarded, which he said could jeopardise the party.

Meanwhile, when asked on the call for Bersatu vice-president, Tan Sri Abdul Rashid Abdul Rahman to relinquish his position following his statement in support of giving of contracts, Mukhriz said the matter should not be turned into a polemic as it was not the stand of the party.

"The statement was only made by an individual, so we cannot say that it is the policy of the party. The party's stand is based on integrity," he said.

Meanwhile, Mukhriz who is also Kedah Mentri Besar, said Bersatu would also try to avoid the 'Umno culture' from being brought into the party and this commitment was voiced by Bersatu chairman, Tun Dr Mahathir Mohamad, who had stated that any Umno leader who joined the party would not be given any position until the 15th General Election.

"We don't want any old culture and negative practice that would weaken and affect the party (Bersatu). We will avoid the matter and at the same time are open to receive any criticism," he said.

Earlier, Mukhriz attended the ceremony to hand over the letters of appointment to trainees of the Future Leaders Programme 2019 aimed at discovering and churning out talents among undergraduates to become young leaders of calibre. - Bernama 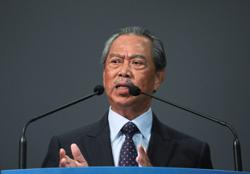