Woman blackmailed for money, sex over her nude pix

That’s him: Siew holding up a picture of her alleged blackmailer as Chong looks on at Wisma MCA in Kuala Lumpur.

KUALA LUMPUR: A 43-year-old businesswoman, who befriended a man through a Facebook group, ended up being blackmailed.

She was harassed repeatedly by the 56-year-old over her nude pictures, a demand for sex and money.

The blackmailer also posted the woman’s nude pictures under a fake Facebook account, and tagged her family members in his malicious posts.

Relating her predicament, the victim, who only wanted to be known as Siew, said she met him a year back.

At the time, she was having problems with her work and received good advice from him.

“I was living with my children as my husband was working overseas.

“He knew I was married and during one occasion offered to buy me some medicine to treat my skin condition.

“That was the first time we met,” she related.

“However, he changed after finding out that I had my own business. He wants to be more intimate with me but I had always made it clear to him that we could only be friends,” Siew added.

On Sept 1, Siew said the man requested to go out with her on a date, which she refused.

But he did not give up and later threatened to harm her family and burn down her house.

“He kept calling me, saying I had preyed on his feelings.

“Eventually, he asked to let him see me in the nude through a video call, saying he would never bother me again,” Siew said.

About one month later, the man blackmailed her for sex with the nude pictures.

Then on Nov 13, Siew said he demanded RM5,000 in exchange to delete her pictures.

She paid him the money but the man continued to harass her before posting her nude pictures on Facebook on Dec 6.

“We’ll let the police investigate the case and take action,” Chong said, adding that the suspect was still harassing Siew until yesterday.

Chong said he had personally attended to 19 blackmail cases this year.

He said seven were women, in their 20s to 30s, being blackmailed with nude pictures, while two men also faced a similar predicament. Playboy US ends print edition due to Covid-19 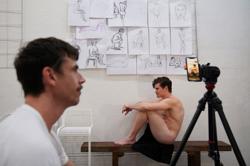