BANGKOK (Bernama): Seventeen of the 129 criminals from southern Thailand who are reportedly hiding in Malaysia are wanted by the Thai authorities for security-related offences, according to a high-ranking Thai source.

The source, which wishes to remain anonymous, told Bernama that the 17 are wanted for, among other things, alleged involvement in the armed conflict in the four southern Thailand provinces of Narathiwat, Pattani, Yala and Songkhla.

The southern Thailand conflict has claimed more than 6,500 lives since 2004.

“The 17 suspects in question carry 22 outstanding arrest warrants against them, all associated with security-related offences,” the source said.

The other 112 criminals are sought for involvement in less serious crimes such as failing to turn up for military conscription, drug abuse and petty offences, it said.

The source responded to a recent Malaysian news article quoting Narathiwat Provincial Police chief Maj Gen Dusadee Choosankij as claiming that 129 criminals from the province are currently hiding in Malaysia.

The police chief claimed that the criminals escaped to Malaysia through illegal routes along the Malaysia-Thailand common border.

The province of Narathiwat in southern Thailand shares a common border with the Malaysian north-eastern state of Kelantan.

In the article, Dusadee also said that his side has sought the cooperation of their Malaysian counterpart to track down the criminals.

Meanwhile, the high-ranking source told Bernama that information gathered from the families of the 129 criminals shows that the fugitives went to Malaysia in search of jobs.

“We (Narathiwat authorities) went to their residences and their family houses to look for them.

"The families claimed the men have gone to Malaysia to work,” he said, adding that the 129 fugitives have 138 outstanding arrest warrants between them.

However, the Thai authorities, according to the source, would continue with their investigation and efforts to arrest them.

The source also said that there is also a possibility that the wanted men are still hiding in Thailand.

It said it is unsure whether the authorities in Malaysia and Thailand have discussed the matter of the 129 criminals or if there were any exchanges of intelligence about the fugitives.

The information about the 129 fugitives was mainly from the Narathiwat authorities. -- Bernama 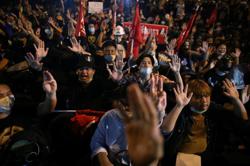