KUALA LUMPUR: The rally to reject the International Convention on the Elimination of All Forms of Racial Discrimination (Icerd) at Jalan Raja here ended earlier than scheduled following rain in the federal capital.

The assembly, which began at 2pm was to have ended at 6pm but some of the participants began to disperse as early as 4.30pm when it began to rain.

Dr Ahmad Zahid said the rally symbolised the unity of the Muslims and Malays in the country. “Despite the scorching heat and the prospect of rain, we are all still here.

“The cooperation of Umno and PAS is in the name of Islam, but we will not forsake other faiths or those of other races,” he said. Dr Ahmad Zahid said he waited for three hours to give his speech and would have waited a lot longer as the sheer spirit of the participants was inspiring.

“Umno and PAS will always defend Muslims in the country along with the rest of Malaysians,” he said.

He added that he was proud that various political parties and NGOs came together to protest Icerd.

Earlier, the organisers reported that the rally was held as a gesture of gratitude over the government’s decision not to ratify the convention.

On Nov 23, the Prime Minister’s Department said the Pakatan Harapan government would also continue to uphold the Federal Constitution, which enshrined the social contract agreed by all races during the formation of the nation. Making their voices heard: Members of a coalition of silat associations marching towards Istana Negara to present a memorandum to the Yang di-Pertuan Agong. — Bernama

Meanwhile, members of a coalition of silat associations marched towards Istana Negara to present a memorandum to the Yang di-Pertuan Agong to protest the “ratification” of Icerd and vowing to defend the Malaysian Constitution.

Wearing colourful traditional Malay attire, the silat exponents, who called themselves Gabungan Silat Mempertahankan Perlemba­gaan, began their 3km walk from the Federal Territory mosque to the palace, which was heavily-guarded by the police.

The letter was received by palace officials. The silat members did not return to Dataran Merdeka. 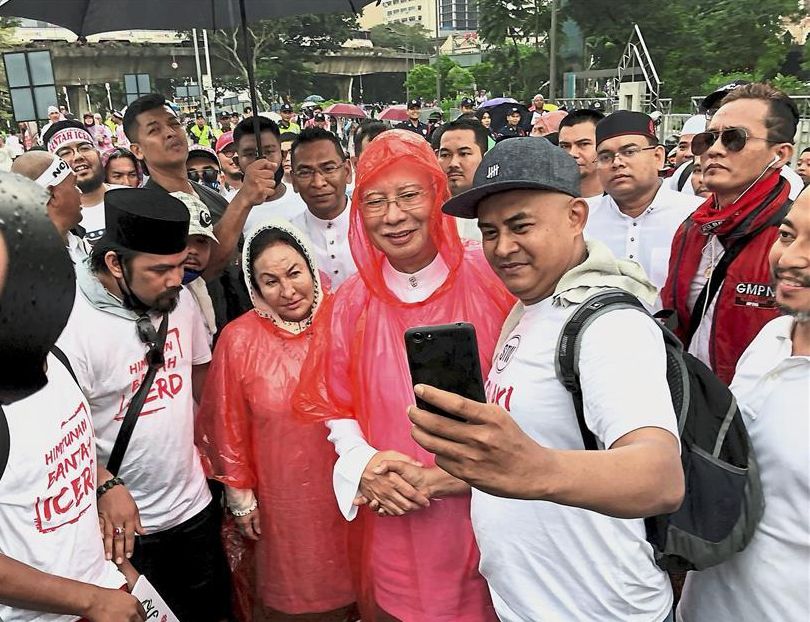 In the spotlight: Supporters taking a photo with Najib and Rosmah at the rally in Kuala Lumpur.

“No outward incident occurred. However, we noticed that there were some who brought along little children to the rally, which is an offence under the Peaceful Assembly Act,” he said.

He added that the police conveyed their appreciation to the organisers for working with the police in ensuring the rally went on smoothly.

Police helicopters were seen hovering above the crowd to monitor the situation while FRU personnel were stationed at various roads leading to Dataran Merdeka.

Six main roads around Dataran Merdeka were closed from 6am. While police presence was evident, PAS Unit Amal also helped to keep the crowd in check.

Despite many fears about the rally, the participants kept to their word and gathered peacefully.

Curious tourists at the train station snapped photographs of the rally goers, who shouted slogans such as “Hidup Melayu” and “Hidup Islam”.

Outside the station, traders were seen peddling rally merchandise such as T-shirts and muffler scarves.

Muhyiddin thanks security forces for keeping the peace