PETALING JAYA: The government has decided not to ratify the International Convention on the Elimination of All Forms of Racial Discrimination (ICERD) amid rising protests by opponents who claimed that the United Nations human rights agreement would jeopardise the special rights of Malays and bumiputra in the country.

With this, the organiser of an anti-ICERD rally in Kuala Lumpur’s Dataran Merdeka on Dec 8, which Umno and PAS planned to join, will go ahead with the gathering to celebrate their victory.

Yesterday, the Prime Minister’s Office announced the decision in a brief statement.

“The Pakatan Harapan government will not ratify the International Convention On The Elimination Of All Forms Of Racial Discrimina-tion.

“The government will continue to defend the Federal Constitution which contains a social contract that has been agreed upon by all races during the formation of the country.”

Groups held gatherings outside Wisma Negri near Seremban and the City Mosque in Kota Kinabalu to protest ICERD yesterday.

Aminuddin Yahaya, secretariat chief of the Malay-Muslim NGO Ummah, which is co-organising the Dec 8 anti-ICERD rally, said the event would proceed.

“It will be held to celebrate the victory of the rakyat in pressuring the government to reject ICERD,” Aminuddin said. 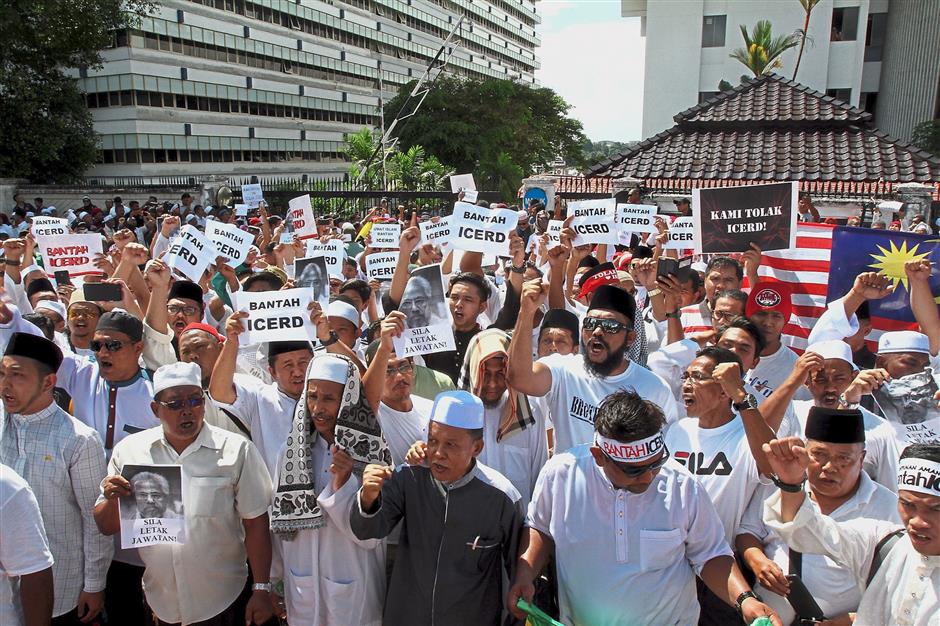 Unhappy crowd: Some of the anti-ICERD protesters gathering outside Wisma Negri in Seremban.

ICERD came under the spotlight on July 2 when Foreign Minister Datuk Saifuddin Abdullah said the government would aim to push for the ratification of six international human rights conventions.

To date, Malaysia has ratified three of nine core UN international human rights conventions, with ICERD being one of the remaining six.

Tun Dr Mahathir Mohamad, in his address at the UN General Assembly on Sept 28, said that Malaysia would ratify the core UN instruments related to the protection of human rights.

However, the Prime Minister also pointed out that the process would not be easy as Malaysia is multi-ethnic, multi-religious, multi-cultural and multi-lingual.

The following month, Minister in the Prime Minister’s Department P. Waytha Moorthy said that Malaysia would ratify ICERD and five other treaties as early as the first quarter of next year.

But on Thursday, Dr Mahathir said there was no way to amend Article 153 of the Constitution, which would be needed to ratify ICERD.

He said Article 153, which gives some privileges to the indigenous people, could be interpreted by some people as being discriminatory.

Amending the Article would require a two-thirds majority support among lawmakers, something which Pakatan does not have.

Supporters of ICERD, however, voiced their unhappiness with the decision.

Lawyers for Liberty adviser N. Surendran said there was no reasonable or acceptable reason not to ratify ICERD.

“It is appalling that the government has faltered and made such an embarrassing U-turn by going back upon their own earlier decision to ratify it,” Surendran said.

“In a single swoop, Umno-PAS appears to have outmanoeuvred PH and put it on the defensive,” Ignatius wrote on his blog.

“This is not a small blunder. The commitment was made in PM’s UNGA address. Not some kampung ceramah,” the Rembau MP tweeted.

But Saifuddin, commenting on points raised by another Twitter user on ICERD, also took issue with many of the critics of the convention.

“The people against ICERD more often than not ... didn’t read ICERD text, didn’t interpret the Constitution properly, didn’t move on from politics of race, didn’t want to debate,” Saifuddin wrote on Twitter.