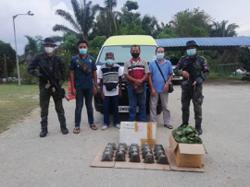 Perak Tengah District police chief Supt Mohamad Zainal Abdullah said the suspect was detained by policemen patrolling the area at about 5am.

“He was driving a Proton Perdana in a suspicious manner.

“On checking the car boot, four black plastic packages containing green leaves suspected to be ketum were found,” he said when contacted.

He said investigations revealed that the suspect obtained the ketum leaves from Kampung Gajah and was planning to send it to Pahang for sale.

Supt Mohamad Zainal said the suspect did not have any previous criminal record and tested negative for drugs.

Home Minister Tan Sri Muhyiddin Yassin recently said the growing of ketum should be banned in Malaysia because it had been abused by drug users.

He said the proposal to ban ketum planting would be brought to the Cabinet for approval. — Bernama