SINGAPORE: The International Monetary Fund (IMF) is impressed with Malaysia’s reforms and is keen to understand more about it – a far cry from the view that the Washington-based agency had on the country 20 years ago.

Ironically, Prime Minister Tun Dr Mahathir Mohamad was the person who bore the brunt of international disdain towards Malaysia when he imposed capital controls on the ringgit in September 1998.

Yesterday, Dr Mahathir who became Prime Minister again in May, said the IMF was interested with Pakatan Harapan’s efforts to rehabilitate the country.

Its managing director Christine Lagarde who requested the meeting with Dr Mahathir on the sidelines of the 33rd Asean Summit here met him for 30 minutes.

Officials who were present at the meeting told The Star that Lagarde asked to spend more time with the Prime Minister for his “guidance, advice and support” on governance.

An official described the request as something big because “countries go running to the IMF for help but IMF is asking for Malaysia’s help”.

“IMF needs our help from a government that was corrupt to one that is introducing reforms.

“It is really an ironic situation,” said an official.

During the meeting, Dr Mahathir explained to Lagarde the reforms that Pakatan had undertaken.

He also reminded her that Malaysia and the IMF had disagreements over its way of tackling the financial crisis in the 1990s.

According to an official, the Prime Minister noted that the IMF acknowledged Malaysia’s way of doing things then was the best approach.

“Lagarde told Dr Mahathir that she was not part of that history. She clearly said IMF has changed,” said the official.

“Dr Mahathir mentioned about his new ministers and Lagarde offered to provide training for them too,” said an official. 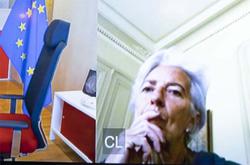