DPM maintains that female circumcision is part of Malaysian culture

KUALA LUMPUR: Putrajaya has reaffirmed its stand that female circumcision is part of Malaysian culture.

The statement came following a flare-up when on Nov 9, Malaysian delegates to the Universal Periodic Review on human rights in Geneva, Switzerland, defended the practice of infant female circumcision as a “cultural obligation” in Malaysia.

The National Human Rights Commission (Suhakam) lambasted Putrajaya for making what it said were “misleading statements” that female circumcision was part of Malaysian culture.

“We are in discussion with the Health Ministry because so far, it is actually something that is cultural, that we have had from before, and this is one of the things they actually said.

“But we are not the same as Africa, all the mutilation (there),” she told reporters at the Parliament on Thursday.

Dr Wan Azizah, who is also the Women, Family and Community Development Minister, added that her Ministry would look into the issue and discuss it.

“If it doesn't give any benefit, then we should do something,” she said.

In criticising the government's stand on the issue, Suhakam chairman Tan Sri Razali Ismail had said it was inaccurate to describe female genital mutilation (FGM) as a Malaysian cultural practice and this had the potential of further damaging the country's international standing on human rights.

He said Suhakam was disheartened by the “unconvincing and misleading” response “poorly attempted” by the representative of the Ministry of Women, Family and Community Development that FGM was not practised in Malaysia.

AMENDMENT: We have amended our headline to better reflect what the DPM said in Parliament 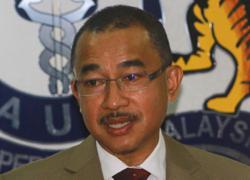