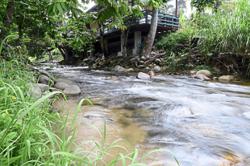 Datuk Peter Anthony said Sabah faces a water shortage of between 10% to 15% and alternative water sources needed to be put in place quickly as development increases.

"We have to find alternative water sources whether we like it or not, we need the dams to solve water shortage problems," he said during the question and answer session at the state legislative assembly sitting here on Tuesday (Nov 13).

Anthony was responding to a question by opposition chief Datuk Dr Jeffrey Kitingan, who is also Tambunan assemblyman, on the status of the Kaiduan (Papar) dam.

The dam was proposed during the previous Barisan Nasional state government but halted due to strong objections from locals and conservationists.

"There are actually two areas where we are looking at to build the dam, whether it will be in the original area at Papar or further down at Mandalipau," he said.

He said after deliberation, it was found that for areas in Beaufort, Papar, Putatan, Kota Kinabalu, Inanam, and Tuaran, the building of a dam was the best solution for water supply shortages.

He said the dam would provide 1,000 million litres of water to the consumers around the areas mentioned.

"But we have yet to finalise the location to build the dam," Anthony said.

The building of the Kaiduan (now renamed as Papar dam) had caused a lot of objections from various parties including locals, conservationists and ministers.

Anthony added that water shortage problems in many parts of Sabah were due to problems with contractors, who had not carried out their projects properly, resulting in consumers not getting the water supply they deserved.

"I am sure the previous ministers and officials are aware of this, but I am surprised why graft busters have yet to call them in for questioning.

"There are also many contractors and identified companies which should be investigated," he said.

He said for areas such as Ranau and Kundasang, that also face water supply disruptions quite often, water pumps should be provided and prepared.

"We will be working towards increasing water supply connectivity and improve the delivery system," he said.