We have a two-year defect liability period, says MRT Corp PETALING JAYA: There is a two-year defect liability period upon the completion and start of operations of the MRT Sungai Buloh-Kajang (SBK) Line, says Mass Rapid Transit Corporation Sdn Bhd.

“Similar to a warranty that you get when you buy a product, the work package contractor (WPC) of the SBK Line is required to make good any defects which are disco­ver­ed during the two-year period,” it said in an email reply.

“Rapid Rail Sdn Bhd, which is the operator of the SBK Line, will forward any complaint with regard to the line to MRT Corp, which will then be investigated.

“If it is found that the problem is caused by a defective design or unsatisfactory work, the WPC will rectify the problem.”

It was responding to claims of infrastructure defects at the Bukit Dukung station and the Bandar Tun Hussein Onn station.

Passengers spoke of roof leakages and wet floors at the two stations. Pails were also placed at some places at the stations.

Mass Rapid Transit Corporation Sdn Bhd (MRT Corp) said if the problem was found to be due to maintenance issues, the operator would rectify the problem.

“MRT Corp will take the necessary action to investigate these complaints, including the leaks which The Star has highlighted,” it said.

It also said complaints on the operations and service of the SBK Line and its feeder buses would be handled by Prasarana Malaysia Bhd as operator of the line.

On the vacant retail spaces at MRT stations, MRT Corp said the renting out of the shops and retail lots at MRT stations was carried out by open tender which was held regularly by the company.

It said the next tender exercise was targeted for the first quarter of 2019, adding that those interested should go to the MRT Corp website www.mymrt.com.my for information on these tenders. 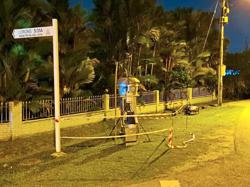