By ROYCE TAN and JO TIMBUONG

RAM Ratings said the decision to float the price of RON95 based on the Automatic Price Mechanism will lift headline inflation by 0.9 percentage points in 2019.

PETALING JAYA: A subsidy of at least 30 sen per litre for RON95 petrol is equivalent to savings of RM30 monthly for an eligible car owner while for motorcycle owners, the savings translates to around RM12 a month.

Those entitled are expected to fully utilise the 100 litres cap for cars and 40 litres for motorcycles, and some might have to pay the non-subsidised price for just a few litres.

A Malaysian driver travels an average of 2,349km monthly. This is based on an average annual kilometre travelled (AAKT) for drivers in the peninsula of 28,184km, according to research by the Malaysian Institute of Road Safety Research last year.

Taking Perodua Axia as an example, its fuel consumption of 21.6km per litre means a driver needs to pump 108.75 litres of petrol monthly.

The first 100 litres will be included in the subsidy while the remaining 8.75 litres is expected to be paid based on the floating rate.

The approximate monthly petrol expenditure for an eligible Axia owner would be RM209.25 compared to RM239.25 without subsidy.

Meanwhile, for a 1.5-litre Honda City, its fuel consumption is around 17.5km per litre, which requires 134 litres of petrol monthly. The estimated expenses for fuel with subsidy would be RM264.80 compared to RM294.80 otherwise.

This translates to around 32.3 litres of petrol monthly. The subsidy should be more than enough for most eligible motorcyclists.

They will receive a subsidy of at least 30 sen for up to 100 litres and 40 litres respectively.

Those with multiple cars are not eligible for this subsidy.

This subsidy is expected to cost the government RM2bil when it commences in the second quarter of next year. It will benefit four million car owners and 2.6 million motorcycle owners.

Those not eligible for the subsidy will have to pay pump prices for fuel determined weekly based on the Automatic Price Mechanism.

Meanwhile, there was a furore on social media as members of the public asked about those with luxury or premium cars with engine capacities of 1,500cc and below. They are also eligible for the subsidy.

Lim clarified in a press conference yesterday that those driving luxury cars are not eligible, even if it is within 1,500cc.

It is still unclear which car models are considered luxury cars or the maximum price of the cars eligible for the subsidy. 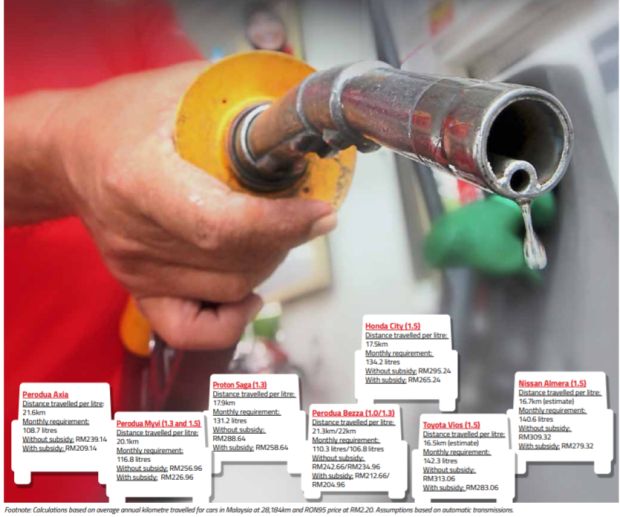 ‘Give us time to iron out the mechanism’

It’s the price that fuels heated reactions among motorists