As at 4pm, the Finance Minister tops the list on the MACC website with an income of RM86,464.92. He had declared his income together with those of his wife and children, but the figure listed is that of his alone.

MACC deputy chief commissioner (Prevention) Shamsun Baharin told news portal Malaysiakini that the figures stated are that of the lawmakers' monthly income and not their joint family income.

The figures do not take into account the MPs' liabilities. 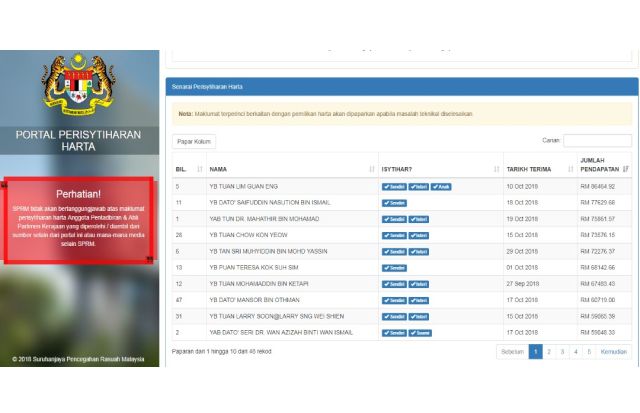 Dr Mahathir had declared his income together with that of his wife Tun Dr Siti Hasmah Mohd Ali.

His son, Kedah Mentri Besar Datuk Seri Mukhriz Mahathir, did not declare his assets and was not on the list.

Deputy Prime Minister Datuk Seri Dr Wan Azizah Wan Ismail was 10th on the list with an income of RM59,048.33.

She had declared her assets as did her husband Datuk Seri Anwar Ibrahim.

However, her daughter Permatang Pauh MP Nurul Izzah Anwar was not on the list.

Currently, bottom of the list of those had declared their assets were Kluang MP Wong Shu Qi and Minister in the Prime Minister's Department Senator P. Waythamoorthy.

However, there were no details listed on their incomes.

The MACC listed 47 out of 123 parliamentarians on the site, with 76 not having declared their assets yet.

The MACC said that detailed information on the assets will be published after a technical problem has been fixed.