KUALA LUMPUR: The Prime Minister has expressed reservations over allowing political parties to set up branches in universities.

“No, no, no. You are free to talk as you like, but tak payah la bagi (there is no need to allow),” Tun Dr Mahathir Mohamad said when asked to comment on proposed amendments to the Universities and University Colleges Act 1971 (AUKU).

The comments by Dr Mahathir, who said this when approached by the media after attending the 2018 Conferment of Fellowship of the Academy of Sciences Malaysia here on Thursday (Nov 1), appears to be at odds with the announcement made a few days earlier by Education Minister Dr Maszlee Malik.

On Oct 30, Dr Maszlee was reported to have said that the proposed amendments would allow political parties to set up branches in all public universities. 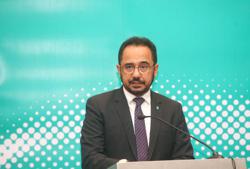