Malaysian political cartoonist Zunar knows how to work a crowd.

When he took the stage at the third Asian Investigative Journalism Conference in Seoul on Oct 6, his jokes and thought-provoking statements kept the entire hall of 400 of the toughest, most seasoned investigative journalists and editors from around the world frequently breaking out into laughter and rousing applause.

Zunar, whose real name is Zulkiflee SM Anwar Ulhaque, has kept his audiences entertained for many years. His satirical cartoons on corruption and abuse of power had also placed him in detention cells as well as the centre of many controversies.

Recently, he was cleared of nine sedition charges, for which he faced up to 43 years in prison. Despite that, he is still determined to say what needs to be said through his cartoons, while injecting his signature humour into it.

R.AGE, who also happened to be at the conference, sat down with Zunar for an in-depth conversation as he shared his thoughts about press freedom, what he will never draw in his cartoons, and what makes him cry.

You've recently been cleared of sedition charges after a long legal battle. How has this experience changed your mindset?

It was a big relief for me, and it's sort of a victory. I've kept on going in this battle, and I didn't want to escape the country or seek asylum – which I had an offer to at that time – because I wanted to keep fighting and use my case to create awareness about the Sedition Act. I had hoped the trial would educate people about this law. Finally, we experienced change, and the charges were dropped.

It was a victory for me, but not for the country. I want to point out that the (sedition) law is still there. To drop the case against those who fought the previous government is a different thing. The question is, will the current government use this law again? And we know the new government already has at least two (sedition) cases.

What do you anticipate will change with the new government, in terms of free speech?

There is no strong willpower from the new leaders in Pakatan Harapan to really make reform and change. Now, the government is focused on the economy but to make a reform, you don't need money.

The Prime Minister, on his first day when he took over, could have announced the abolishment of the Sedition Act, Official Secrets Act and Printing Presses and Publications Act. He could have said that on the first day – and that is willpower. The process (of changing the law) can take longer but if the Parliament and Senate receive a signal from the government, they can do it.

In terms of freedom of expression, it's all subjective – some people say these laws are good, and some say no. But the indicator is the law. If the law still exists, there's no guarantee that the government will not use it again. I don't see a clear indicator now (that there will be any change).

What do you think about the state of journalism in Malaysia now?

We speak so much about the laws that control the media in Malaysia, such as the Printing Presses and Publications Act and the Official Secrets Act. But I realised that we should not talk only about the law.

Personally, I think the media in Malaysia is not playing its role as an important part of the democratic process. We have a new government, but it looks like the media is changing from old to new masters.

Indonesia is a good example. During Gus Dur's (President Abdurrahman Wahid) era, he abolished the (Ministry of Information). He said, there is no use to have a government body to control the media. They became free, and had no connections at all with the government.

In Indonesia's MetroTV hard talk show by Mata Najwa, you need to be prepared to go on that programme. And they always have so many debates on TV. Journalists should do their homework and give something informative. As the audience, I need facts, I don't want to see people talking about something rhetoric all the time. I want the media to provide an alternative.

You are seen as an advocate for democracy and free speech. What are your thoughts on the arrests of Reuters journalists Walone and Kyaw Soe Oo in Myanmar?

We expected that this wouldn't happen under Aung San Suu Kyi. I think it's bad and sad to see that it's still happening, not just in Myanmar but also in Central America, Nicaragua, and Turkey where journalists are arrested for performing their duties. The media has to come out strongly on this - that's the only way to help them.

When it happened to me, cartoonists organisations from around the world came and gave their support, and even wrote a letter to the Prime Minister. Once, cartoonists from the US did a demonstration in front of the Malaysian embassy in Washington DC. So, journalists in Asean countries should take a more proactive role to defend (the arrested Myanmar journalists).

You were arrested and detained a couple of times. Tell us about your experience in the lock-up, and what you did to remain positive

But talent does not belong to me. It's not a gift but a responsibility. It's a gift to be used for the community, for the benefit of others. I'm a cartoonist, I have a talent, and cartoons are a very effective medium. So why don't I use my cartoons to educate and at the same time, give a message to people?

It's not a choice, but a duty. That's what keeps me going. As an artist, what satisfies me is not about how much I get. It's when people come to me and say "thank you for that cartoon, now I understand what's happening based on your cartoon". I'm proud because it means that I gave an impact, and that's the purpose. Sometimes, if what they say is touching enough, I cry. That (the message) was what I had in mind, and you got it.

Was there ever a time where you thought that being a political cartoonist was too risky, and considered giving up?

There were times when I was alone in the police lock-up when I wondered why do I do these things, why didn't I just do normal cartoons like the others? An established cartoonist suggested I "soften" my cartoons so that I can sell it. I said no, I don't want to just make another cartoon.

But at some point when I was alone, this came back to me. I think, they're right, why do I do this and end up in police lock-ups? I keep reminding myself that it's my responsibility, and when I was released I got very strong support. I think people need me more than I need myself [laughs]. So it's okay, I don't entertain what's in my mind. The important thing is that people need me more.

Have you ever drawn a cartoon and decided that it was too controversial to be published?

Sometimes, it takes me more than 10 hours to come out with one cartoon. To actually draw, it takes me one or two hours. The rest is homework – to know about the issue, to know the stance and get the correct facts, and learn the different perspectives.

More important is to understand what is in people's minds about the issue. That is what I do first, which is why I seldom draw a cartoon and as an afterthought, think it's controversial.

It's important for the artist to know what he's doing – then he can defend his cartoon.

Is there anything that you will never draw?

I will not draw cartoons to condemn other religions or races. I spoke about this in the (Cartoonist Global Forum) in Paris (which he had just attended a few days before). In Europe, they push to draw whatever they want, because it is their right.

But I don't choose that way. To be effective, why don't we draw something that targets a "common ground enemy", something that can be shared around the world? What can I draw that people in Africa, the US, Central America and the Middle East can say yes, we agree?

The issue that we all share is the common enemy, and the common enemy in cartoons is the corrupt regime. Corruption, anti-capitalism, dictatorship – these are important issues. If we draw about religion or certain ethnic groups, that's unnecessary and make others unhappy.

People talk so much about rights, but few people talk about moral rights and moral ethics. Other cartoonists may not agree with me, but I say that we need to have some ethics about doing this.

What sort of cartoons will you produce now? Where, or rather who, will you draw your inspirations from?

I would like to focus on issues that have been forgotten and ignored – the mindsets. In Malaysia, we talk so much about politics that we forget societal issues. Issues like race, religion, the orang asli (indigenous people), elephants killed in Borneo, and manners like driving and parking manners. These aren't small issues - they reflect on the whole value system in the country.

People only talk about themselves and not others – that's why we cannot progress. We cannot achieve anything if we don't love each other again. What is the new Malaysia about? It's about love. We need to bring it back again. 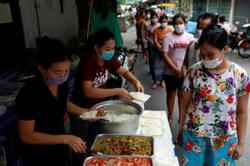