Ongoing work: Excavators being used to do the restoration work at the landslide hit areas on Penang Hill.

GEORGE TOWN: Visitors to Penang Hill need not fear the restoration works being carried out at the landslide areas as the hillslopes have been strengthened over the past few months.

Penang Hill Corporation (PHC) general manager Cheok Lay Leng said most of the affected areas were not frequented by visitors, including the upper station and its surroundings.

“We understand the holiday season is approaching and we will put sign boards to warn visitors on the unsafe areas along the hill roads,” he said yesterday.

Cheok said some of the work would be completed over the next six months while the major ones could take about a year to finish.

“We are giving utmost priority to the safety of the workers and stabilisation of the slopes would take some time as we do not want to do a rushed job,” he said.

The slope stabilisation projects, costing more than RM10mil, had been awarded to contractors and works are being done round the clock at a few areas on the hill.

The hillslopes were badly affected during the freak storm on Nov 4 and 5 last year, where rain and floods inundated the state resulting in more than 300 landslides on Penang Hill.

The funicular train service was also disrupted for two months.

Cheok said major works were also being carried out near the summit and upper tunnel road.

“We are looking at 16 locations where work is being done to control the soil erosion, strengthen the slopes and repair the roads,” he said. 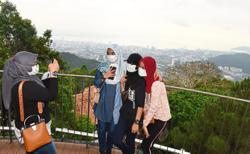 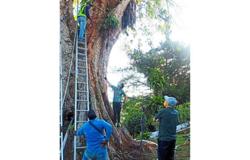