Is death penalty a deterrent?

By ROYCE TAN and JUSTIN ZACK 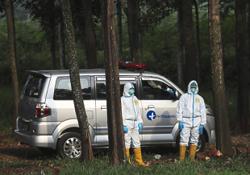 PETALING JAYA: The men-in-blue and former top guns are all for capital punishment as a strong deterrent for serious crimes but a criminologist says there has been no scientific studies to show this.

Universiti Sains Malaysia (USM) associate professor in criminology Dr P. Sundramoorthy said it had been acknowledged in many studies that the death sentence as a form of deterrent was insignificant.

“It is only prudent to abolish the death sentence, which is also in accordance with the Universal Declaration of Human Rights.

“What needs to be understood is we have never seen any scientific study in Malaysia to illustrate its effectiveness or non-effectiveness.

He said it was also important to take the views of the next-of-kin of murder and drug trafficking victims into consideration.

“Have we taken the views and feelings of the victims and their fa­­mi­lies in regards to the abolishment of capital punishment?

“Is our next step going to be abolishing caning? There are also talks about doing away with whipping.

“What is the punishment that will be used to replace capital punishment? Imprisonment for life? ” Dr Sundramoorthy asked.

Dr Geshina Ayu Mat Saat, also a USM criminologist, did not recommend abolishing the death penalty unless there is sustained and maintained finances for the entire life span of violent criminals, sufficiently trained personnel and enough space.

“Overcrowding is an issue. It’s not only infrastructure but also human resources.

“Is it the best way to make use of tax payers money to support these violent offenders in the first place?

“Since these offenders place no value on lives they had destroyed, should tax paying citizens pay for their continued incarceration?” she asked.

Dr Geshina added that while having the death penalty did not stop some criminals, not having it at all and knowing of eventual release would only increase the likelihood of law breaking.

She said a better way was to be proactive by looking into the root causes of criminality and addressing it and also study the countries with low prison occupancy.

He said under the Dangerous Drugs Act 1952, there was a provision to sentence a trafficker to imprisonment for life, with whipping of no less than 15 strokes.

“We will leave it to the AG (Attorney General) and the courts. But as far as we are concerned, we will go for the maximum penalty,” he said.

However, Comm Mohmad said personally, he felt the death penalty was a more suitable punishment for drug trafficking offences.

“I would still prefer the death penalty. You must remember that these traffickers kill people.

“But as an enforcement officer, we will follow the law passed by Parliament,” he said.

Former Inspector-General of Police Tan Sri Musa Hassan said the death penalty should not be abolished, especially for serious crimes such as murder, treason and drug trafficking.

“Even though there is a death penalty, the courts will normally reduce the charges. In order to show deterrence, it should be retained.

“Without it, criminals won’t be afraid. People will not hesitate to commit such crimes,” he said.

Former Deputy IGP Tan Sri Samshuri Arshad said doing away with the death penalty was akin to a licence to kill.

“A murderer can go on rampage killing, knowing that he will not be put to death. There is nothing to be afraid of,” he said, adding that the emotion and feelings of the victims’ next-of-kin must be taken into consideration.