Teachers: Teaching no longer a passion but a burden today Tan: ‘We have also engaged with Education Minister Dr Maszlee Malik on the issue of teachers having to do redundant work.’

PETALING JAYA: Every month, the National Union of the Teaching Profession receives between 30 and 50 cases of stressed teachers.

NUTP secretary-general Harry Tan said registering students’ attendance online and in their physical logbook, reporting the school’s level of cleanliness and safety, which should instead be filed by the contractors appointed by the school, are among the redundant paperwork teachers had to undertake.

“We have also engaged with Education Minister Dr Maszlee Malik on the issue of teachers having to do redundant work.

“He has made it a priority as he recently announced the ministry’s aim of relieving teachers from the burden of clerical duties by next year,” Tan added.

Here are four examples of undue stress teachers go through in the name of educating their students. These are only the tip of the iceberg.

#1 Her only child – the light of her life – passed away just three months after being born.

Zura* had given birth to the beautiful and healthy baby girl four years ago, despite having a fibroid problem (the most frequently seen tumours of the female reproductive system).

It was a 15-year wait for the language teacher from Melaka and her husband to start a family.

Yet, she wasn’t by her side when the baby girl drew her last breath because, as a responsible teacher, she wanted to meet her school’s deadline for a report on students’ achievements.

“My baby was three months old when she had a fever.

“Instead of applying for leave and taking her to the hospital, I decided to go to school because it was my duty to ensure that the report was completed before report card day.

“I thought that my beautiful angel could wait until a while longer. Sadly, I received a call from the nanny at 9am telling me that my angel was already very weak.

“It took me half an hour to reach the nanny’s home. When I arrived, my angel had left us forever,” recalled Zura who is now a mother of an adopted son.

On top of clerical work, Zura said making sure students did well for the exams was a herculean task.

“Although it is stressful, it is the main responsibility for all teachers and we still find a way to cope.

“However, completing administrative work always puts us under lots of pressure and it interferes with our teaching,” she said, adding that the school administration and parents would always blame teachers for everything that went wrong.

“Our education system focuses too much on creating an abundance of straight A students,” she said.

#2 Amber* was an enthusiastic and dedicated educationist who entered the teaching workforce as an accounting and economics major.

However, she was required to teach Mandarin – a subject she wasn’t familiar with – due to the lack of such class teachers in her school in Selangor.

She has stopped teaching since last year and is under medication after being diagnosed with depression caused by stress.

“Amber can’t even step into the gates of our school,” said Riley*, a colleague of Amber, who pointed out that there were many more cases of teachers being forced to teach a subject that wasn’t their major.

“Teachers have to face students. How can a teacher carry out her duty properly when she herself has not completely mastered the subject that wasn’t her major,” said the veteran educator.

She observed that young teachers were less capable of coping with stress than more “matured teachers”.

“Some of those in charge of teaching the afternoon sessions (Forms One and Two) do not teach the syllabus properly. They expect teachers from the morning sessions (Forms Three to Five), who would have to prepare students for major exams like PT3 and SPM to pick up their slack,” said Riley.

#3 Amy*, who has been a teacher for the past 28 years, said that teaching was no longer as fulfilling as when she first started working in the field.

“We used to have the liberty of teaching what we wanted. We could design our lessons and spend quality time with our students. Not anymore,” she said.

Describing teaching as a profession that was once “noble” and “graceful”, she said teachers were now responsible for ensuring students got as many As as possible for PT3 and SPM.

She pointed out that teachers in cluster schools would face higher levels of pressure as they were responsible for upholding the reputation of the school.

“We follow standards that are higher and different from non-cluster schools. We have to produce key performance indicators (KPI) for three consecutive years to ensure the status of being a cluster school would not be removed.

“If we miss out one year of KPI, the school will be under scrutiny,” she said, adding that teachers would be blamed when the students did not perform well in examinations.

#4 Pauline, a teacher from a school in Kuala Lumpur who has 30 years of teaching experience under her belt, attributed high expectations from parents as the main factor that caused stress among teachers.

She said parents no longer educated their children at home due to busy work schedules, leaving teachers with the responsibility of parenting their children and imparting knowledge.

“Children are often left alone at home. They only attend six hours of school, which is about 25% of the day.

“But parents expect us (teachers) to teach and ingrain in them good values, manners and knowledge when they should be the ones to educate them first,” she said, stressing that parents were children’s first educators.

* Not their real names 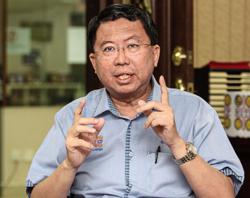