BALING: Laksa kebok seller Daud Ismail hopes the public will not jump to the conclusion that it was the laksa from his eatery in Kupang, Baling, Kedah, that has left two dead and many others ill.

“Let the authorities investigate. The result of the laboratory tests is not out yet.

“Stop the finger pointing,” said the 53-year-old, whose business has been temporarily closed, when met at his house here yesterday.

It was earlier reported that 61 cases of food poisoning related to the laksa from the eatery – including the two deaths – were detected in Kedah (24 cases), Perak (16) and Selangor (21).

Out of the total, 21 people have been hospitalised in various hospitals in the three states while 38 others received outpatient treatment.

All are reported to be in stable condition.

Despite the negative remarks on social media, Daud said he was still hopeful of expanding his business.

He said the Baling Health Department had inspected his kitchen and stall four times, and took away food samples.

“I am stressed over the incident but I would not be demoralised by it. I still harbour the hope of expanding my business and introducing a new dish called laksa kebok udang tertunggeng one day,” he said. 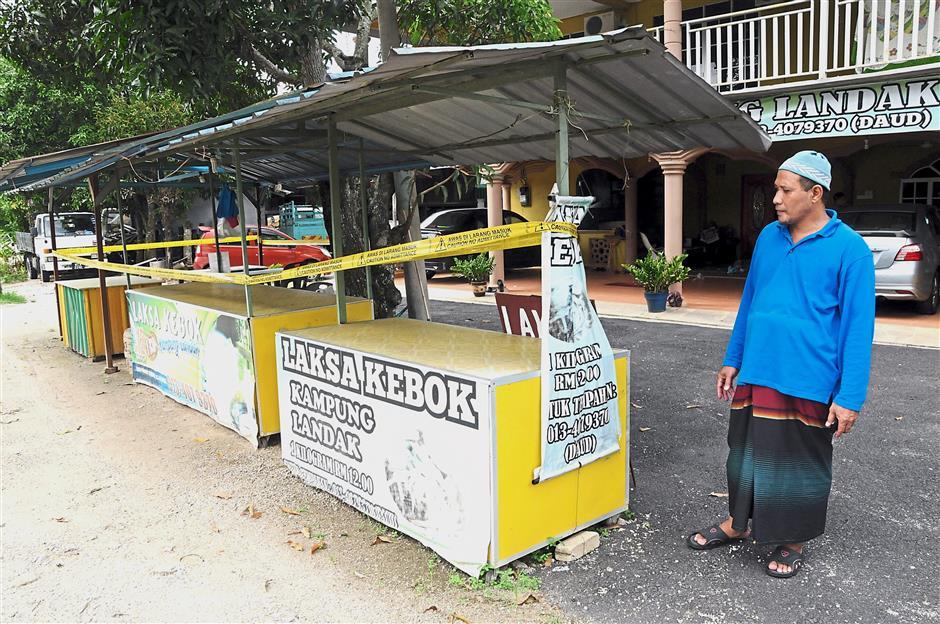 Expansion on hold: Daud looking pensive standing next to his stall that has been sealed by the health authorities.

Daud said he had been in the business since 2002. He started at a market in Kuala Ketil before opening up a stall in front of his house in 2016 till today.

“If my laksa had indeed caused food poisoning, then my 11-month-old grandson would be the first victim.

“He eats my laksa every day, together with my other family members,” he said.

Daud said he did not use preservatives, shrimp paste and ginger flower for his laksa.

“I always remind my customers to eat the laksa immediately after buying it, and not to keep it for too long.

“They can store it in a refrigerator if they want to keep it,” he said.

Meanwhile, neighbours claimed they did not experience any discomfort after eating the laksa prepared by Daud.

Wireman Mohd Shafizal Bakhari, 41, said: “My whole family eats the laksa twice a week and we had no problems with that.”

Another neighbour Siti Aishah Lebai Yunus, 75, said she had been patronising the laksa stall for many years.

“I have been eating since they opened the stall in the village until today.

“I have never experienced stomachache or diarrhoea. I even finished a bowl of the laksa when the alleged incident took place.

“I fear the victims could have eaten something else, who knows?” she said.