PETALING JAYA: Melaka executive councillor Norhizam Hassan Baktee has given those who published the viral video of him in a war of words with villagers an ultimatum - remove the video or face action.

In a video interview with Melakakini, Norhizam said they had 24 hours to remove the video.

"If you continue with your accusations and viral video, I will take action soon.

"This is my warning to them," he said in the video on Tuesday (Oct 9).

"Don't main viral (play with viral video) if you don't know the full story. Do your research about the truth first," he said.

The Pengkalan Batu assemblyman justified raising his voice during the heated discussion with villagers, saying he was merely responding to their aggression.

"As an exco, I would not be rude. I turun padang (went to the ground) to work, and I faced 20 people who opposed and provoked me...

"They raised their voice, so I raised mine too, that is it. I did not say anything rude or used insults," he added.

Norhizam said he accepted criticism and would apologise if he was in the wrong.

"I'm not angry if the criticisms are true. I am not egoistic or hypocritical," he said.

"It is not my fault. I was facing an aggressive community, so I needed to raise my voice. There was nothing more than that.

"If I am in the wrong, tegur (advise) me, and I will accept my fault and apologise," he added.

In the viral video, the Melaka Agriculture, Entrepreneur Development and Agro-based Committee chairman was seen raising his voice during a dialogue over a road dispute .

Norhizam  was accused of being uncouth towards the villagers who were locked in an argument with residents in Bukit Beruang here.

The dialogue was arranged after some 600 residents of Taman Akasia demanded that the link be closed, following a spate of accidents and motorcycle thefts in the residential area. 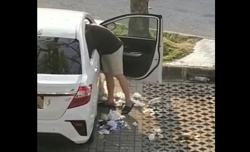