MOA launches E-Sart for complaints on bribery and misconduct

KUALA LUMPUR (Bernama): The Ministry of Agriculture and Agro-based Industry (MOA) has launched the MOA Integrity Complaint System (E-Sart) for the ministry's staff and members of the public to share information or make complaints on matters related to corruption, bribery and misconduct among MOA employees.

Its minister, Datuk Salahuddin Ayub, said that the lack of integrity, which stems from individuals, can damage an organisation's reputation.

“Each complaint in the E-Sart will be processed and analysed before action is taken.

“If there are elements of corruption or bribery, the information will immediately be channelled to the Malaysian Anti-Corruption Commission (MACC), while code of conduct violations will be handled by the MOA Integrity Unit,” he said in his keynote address at the launch of E-Sart, read by MOA secretary-general, Datuk Mohd Sallehhuddin Hassan, here.

It was held in conjunction with ‘Program Bicara Pagi MOA 2018' at the Farmers' Organisation Authority building. Meanwhile, Mohd Sallehhuddin told reporters after the launch that the E-Sart was initiated by MOA Integrity Unit in 2017.

“It is hoped that the launch of E-Sart will help prevent corruption and misconduct at an early stage, cut management and operation costs, and protect the ministry's image.”

He added that the identities and information of complainants will be made confidential, in line with the Whistleblower Protection Act 2010 (Act 711).

All members of staff of MOA and members of the public can provide their complaints and grievances at http://sart.moa.gov.my. - Bernama 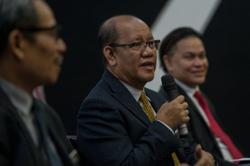