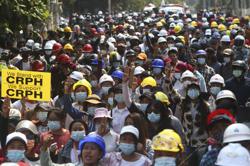 KUALA LUMPUR: Health Minister Dr Dzulkefly Ahmad (pic) has pledged to bring down the cost of testing for and treating tuberculosis as part of Malaysia’s commitment to end the TB epidemic by the year 2035.

“Malaysia, as an upper higher middle-income country, pledges that the cost for rapid molecular test and anti-TB treatment for drug-resistant TB be reviewed so that more people can benefit from the test and treatment,” he said in a statement on late Wednesday (Sept 26).

Dr Dzulkefly was in New York to deliver the country’s statement at the UN High-Level Meeting on the Fight Against TB meeting with the theme “United to End Tuberculosis: An Urgent Global Response to a Global Epidemic” on Wednesday.

He said that TB can be eliminated by ensuring universal access to high-quality diagnosis, treatment and care of all forms of TB, including multi-drug resistant TB (MDR TB).

He said that Malaysia is aware that TB is one of the top causes of death worldwide and the highest killer among all infectious diseases.

Dr Dzulkefly said the country uses the standardised TB recording and reporting system, which has been upgraded to include the latest WHO recommendations to cater to the country's needs.

“It still faces a number of important challenges that require further intensified and concentrated efforts, such as tuberculosis prevention among children, HIV and other co-morbidities.

“Systematic screening of TB high-risk groups has been implemented since 2015,” he said.

Cooperation between public and private sector, socio-economic and psychosocial support from the community are also important factors for successful TB treatment and outcome, he said.

Malaysia is committed to implement, monitor and evaluate the strategies proposed in the National Strategic Plan for Tuberculosis Control (2016-2020) with full support and engagement of a wide range of stakeholders, he said.