KANGAR: Two orang utan, looking stressed and frightened, are among hundreds of endangered or exotic animals that had been travelling in the sea for three nights before the Customs Department foiled the smuggling attempt.

The animals, which were found on a vessel around midnight on Friday near Langkawi and Kuala Perlis, were being sent to Thailand.

It is learnt that the animals could fetch up to RM500,000 in the black market.

Customs Department director-general Datuk Seri T. Subromaniam said the success was a result of the sea patrol coordination between the department and its Indonesia counterpart.

He said they also detained three Indonesian crew members aged between 40 and 50.

“The captain failed to produce documents on the cargo when we stopped them. “Upon inspection, we found the animals. 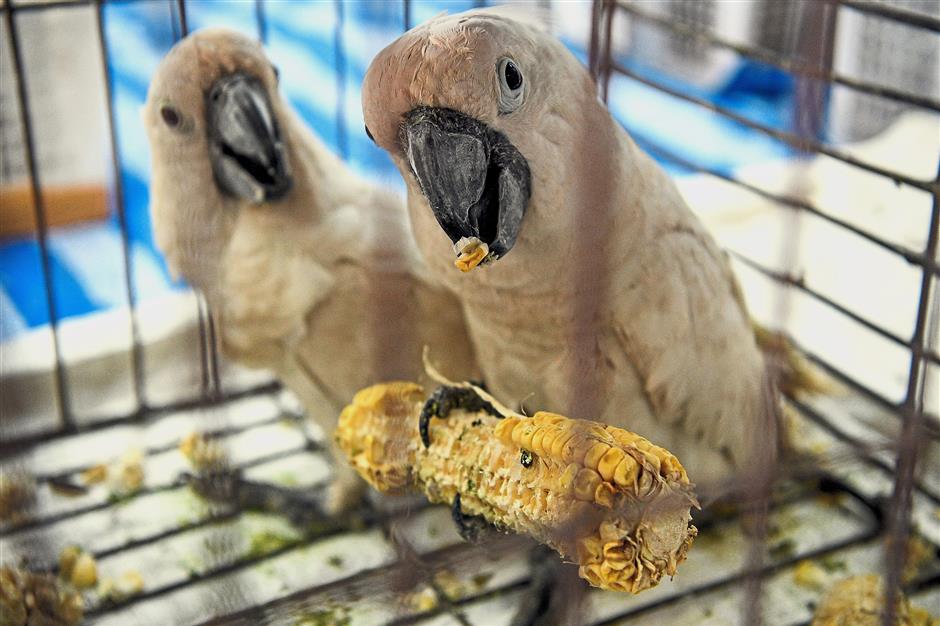 Two alba cockatoos eating after being rescued from an attempt to smuggle them to Thailand. — Bernama

“All the seized exotic wildlife had been handed over to Perlis Department of Wildlife and National Parks (Perhilitan),” he told a press conference yesterday.

The crew members are believed to have smuggled the wildlife from Sumatra, Indonesia.

On another matter, Perhilitan director-general Datuk Abdul Kadir Abu Hashim said poachers who install and own snares would face more severe penalties when the Wildlife Conservation Act is reviewed.

“The use of snares is a serious crime that can cause injuries and deaths to wildlife while some were permanently disabled,” he told Bernama.

At present, individuals convicted of using snares could be fined not less than RM50,000 and not more than RM100,000 and imprisoned not exceeding two years.

“We recommend that amendments to this act impose a longer jail term and a heavier penalty,” he said.

Abdul Kadir said that from January to July, 26 wildlife species such as tapir, sun bear, serow, sambar deer and deer were found dead after being caught in snares.

He said as many as 653 wire and nylon snares and bird nets were destroyed since the beginning of the year while 79 forest sites were identified as the poachers’ area of focus.