In big demand: Anglers can now go fishing for empurau, the most expensive freshwater species in Sarawak, at the Bakun Lake.

BELAGA: Many anglers dream of catching the empurau fish, the most expensive freshwater species in Sarawak, and sport fishing at the Bakun Lake has the answer to this craze.

According to Romio Ding, the operator of Bakun Paradise which pioneered sport fishing at the man-made lake the size of Singapore, there are still many river tributaries and fishing grounds that have yet to be explored.

Since the activity began in 2011, the company has brought in many groups of anglers.

Besides local anglers, there are those who came from the peninsula, Singapore and Japan.

“There are fish at Bakun Lake such as the empurau, sebarau, semah and baung.

“The quantity of fish caught depends on the method used by the anglers,” he told Bernama.

The Bakun Lake was formed from the construction of the Bakun hydroelectric power plant and which, at about 695sq km in size, is the biggest man-made lake in the country.

Romio said the empurau, which could fetch between RM700 and RM1,200 per kg, was among several species that attracted anglers to the lake.

However, he conceded that it was not easy to track down the much sought after fish.

“There are several types at Bakun Lake, including white empurau and red empurau.

“The white empurau here looks very different from the empurau in other places,” said Romio.

An interesting point about sport fishing at Bakun Lake is that the anglers adopt the catch-and-release policy.

“Anglers at Bakun Lake use the casting technique. Usually, they will release the fish caught,” Romio added.

He hoped the activity at Bakun Lake and Murum Lake (another man-made lake) would draw more tourists there.

“So far, most anglers took back sweet and unique memories with them. The wide variety of fish available here is certainly an attraction,” he said.

Those who want to experience catching fish at Bakun Lake can obtain further information from the Bakun Paradise Facebook page. 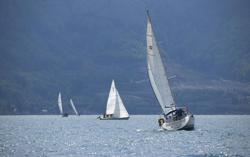