Nothing quite unites Malaysians and fuels our patriotism as much as sports, with perhaps our love of food coming in a close second. Pumped by our success at last year’s SEA Games, the Asean Para Games and the more recent Asian Games in Jakarta, things are looking up indeed. Here are some of the men and women leading the way for a new era in Malaysian sports, and their hopes – and challenges – for the “New Malaysia” and new government.

PARA swimmer Fraidden Dawan often misses the traditional food from his Dayak community, as it is quite hard to get in Kuala Lumpur.

However, his craving for home-cooked delicacies may be the only thing that differentiates as we celebrate Malaysia Day today.

“I was born and grew up in a village in Mukah near Sibu. I’m from Sarawak, but there is no difference in sports. I compete for and represent Malaysia,” says Fraidden, who has bagged a total of 12 career gold medals at the Asean Para Games since he took up swimming in 2002.

“When I do well, I make Malaysia proud. I’ve the country’s flag on my attire, and I think every Sarawakian and every Malaysian feels proud when someone from a small village competes on the international stage.”

Fraidden’s involvement in swimming began when he became disabled in 2000 following a freak incident. As a young teen, he was helping his father cut down a tree in his village when he slipped on the wet ground.

The tree fell and crushed his lower left leg, which had to be amputated.

That is all in the past and Fraidden, now 31, is hoping the government of the day will pay attention to the needs of the disabled.

“The facilities at the National Sports Complex in Bukit Jalil have improved and are more disabled-friendly, since the complex was renovated for the SEA Games and Asean Para Games in Kuala Lumpur last year.

“But it’s still not that easy getting around in the city. I hope the authorities will have more ramps and better access to public transport.

“Overall, the previous government recognised the achievements of para athletes through allowances and incentives, and I hope this continues,” says Fraidden, who will be competing in the Asian Para Games in Indonesia from Oct 8-16.

He bagged one silver for the 200m individual medley and two bronzes for the 100m backstroke and 400m freestyle at the last Asian Para Games in Incheon four years ago.

He is classified as a para swimmer in the S8 category, which covers swimmers with joint restrictions in one limb or with double below-the-knee amputations. If there is one thing that national bowler Syaidatul Afifah Badrul Hamidi wishes will become a reality under the new government, it would be for brighter post-career prospects for our sportsmen and sportswomen.

The 27-year-old, who bagged a gold and a silver at the Jakarta Asian Games, feels the government can do more to help athletes lead a better life after their retirement.

True, there is the National Athletes Welfare Foundation (Yakeb), which was formed in 2007 to cater for former athletes, and which has 2,400 members currently.

However, Yakeb cannot sustain operations as its coffers have dried up.

Syaidatul feels the government should consider several initiatives to prepare athletes to stand on their own instead of relying on one-off assistance from organisations such as Yakeb when the need arises.

“There are many schemes the new government can look into, such as health insurance, gratuities and even via the Employees Provident Fund,” says the two-time SEA Games gold medallist.

“All these benefits and savings will come in handy when we eventually retire.

“It would be great if the government could offer scholarships for athletes to further their studies, so that we’ll have the option to venture into coaching or sports management.

“All these efforts would also serve as further motivation. Athletes will feel good that their sacrifices and hard work are being appreciated,” says Syaidatul, who was a member of last year’s champion team at the bowling world meet in Las Vegas.

She has dedicated the gold medal she won with Esther Cheah and Siti Safiyah Amirah Abdul Rahman to all Malaysians as they celebrate Malaysia Day today. 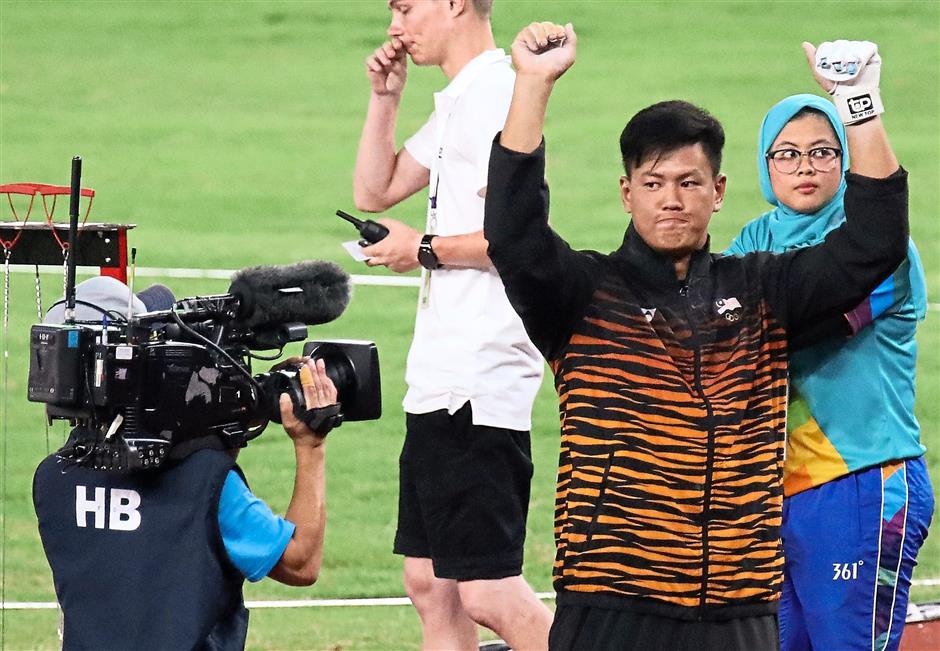 SARAWAK’S Jackie Wong Siew Cheer is not only a successful hammer thrower, he is also a strong advocate for athletes – especially those from his state.

The 26-year-old from Sarikei, who holds the men’s national hammer and SEA Games records, hopes athletes will be given fair treatment under the new government.

He has broken the national record 12 times in five years, but hopes Malaysia will not turn a blind eye to the plight of Sarawakian athletes.

“My state gives incentives and allowances for athletes who win medals in the Malaysia Games (Sukma).

“However, those who don’t win any medals don’t get any allowances – but these athletes have trained hard too,” says Jackie, who holds the current national record with a throw of 66.01m.

“All junior athletes should be given training allowances, as not many athletes from my state can afford it.

“We have good coaches and facilities for throw events in Sarawak, but we need more high-calibre coaches for other events too.

“I want my state to be the No 1 in producing athletics talents,” adds Jackie, who has been trained by Chinese coach Gu Yuan since 2013.

The Sarikei lass, who will be sitting for her Sijil Pelajaran Malaysia (SPM) examination in November, holds the national record of 60.99m from the Mokpo Championships in South Korea last year.

Meanwhile, Jackie wants to be a good role model for others in Sarawak.

“My mission is to break the 70m barrier in two years time,” says Jackie, who broke the SEA Games record with a hurl of 65.90m to win gold in Kuala Lumpur last year.

“I also want to be ranked within the top five in Asia in two years,” he adds. PROGRESS may be staggered but the signs are positive for Malaysian football.

And national Under-23 team centreback Dominic Tan hopes fans will stand by the team through thick and thin as they aim to take the game to greater heights.

He reckons that Malaysian sports fans, especially football supporters, need to be positive and look for ways on how they can contribute to make the country a sporting nation under “New Malaysia”.

The Johor Darul Ta’zim (JDT) defender was the target of scathing attacks on social media after his mistake led to Malaysia’s 0-1 loss to Japan in the last 16 of the Asian Games last month.

While he agrees that fans have the right to be critical of a player or team’s performance, he hopes their energy could be channelled to more encouraging words once in a while.

“Fans’ criticism is part and parcel of sport, there will always be haters. As an athlete, I’ve learnt to accept it, but I strongly believe it would be better to be more positive,” says the Penang-born footballer.

“Any sport would be better with positive support. In countries such as Australia, Japan, South Korea and those in Europe, their fans always support their teams no matter what.

“This kind of support is needed here. Malaysian football is starting to make progress. We need fans to turn up at the stadium to show their undivided support – it should be part of our sporting culture.

“Running down our own athletes for a poor display during a competition is not going to help improve our performance.”

The lanky defender grew up in Singapore and was a former student at the Singapore Sports School before opting to represent Malaysia in 2014.

He says wearing the national team jersey is the best feeling.

“The players are from different states and backgrounds, but we are one as a team. I think our diversity is our strength. We fight for one common goal, and that’s to bring glory to the nation.

“Being an athlete is one of the most incredible feelings.

“As we celebrate Malaysia Day, I hope, we can move forward together to become a better sporting nation,” says Tan.