This means only eateries that make RM1.5mil and above annually will be subject to SST.

“We received feedback from owners of coffee shops and nasi kandar restaurants, (and) they have asked for the threshold to be increased from RM500,000 (under the GST).

“Some have asked for it to be increased to RM3mil annually, which it is a bit too much.

“But I have agreed to take this into consideration, so we are increasing the threshold to RM1.5mil. But this will be final.

“So only if your annual turnover is above RM1.5mil will you be subject to SST,” said Lim at a media briefing on SST at the Treasury building here Thursday (Aug 30).

Lim said he hoped the increase in the threshold would prevent restaurant owners from increasing prices.

“But we urge consumers to become our eyes and ears. If they find that eateries have increased their prices due to SST, they can complain to the Domestic Trade and Consumer Affairs Ministry,” he said.

Lim said the government’s approach with the SST was to ensure the people’s well-being were taken care of.

“We want to ensure that the people are not burdened. The government views this as more important than collecting revenue from taxes.

“What is the point of having nice-looking figures, if the people are suffering?” said Lim. 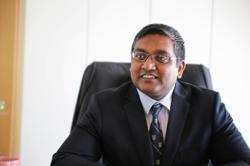