PETALING JAYA: A DAP veteran has claimed that the appointment of former Inspector-General of Police Tan Sri Abdul Rahim Noor as the new facilitator for the southern Thailand peace talks shows a “weak determination” by the government in forging institutional reforms.

“The appointment would inevitably reflect a failure of the government to set a standard of integrity for public officers and representatives,” said former Johor DAP chief Dr Boo Cheng Hau in a statement Wednesday.

“I urge the DAP secretary-general and Finance Minister Lim Guan Eng to raise the issue in the Cabinet meeting for in-depth soul searching by the present Cabinet members in regards to where the new standard for Malaysian public officers' integrity shall lie.

“All Cabinet members are urged to collectively reject the appointment of Abdul Rahim to represent Malaysian in an international peace talk to prevent Malaysia's positive image as a nation determined for better changes, from deterioration,” said Dr Boo, who is now the DAP Taman Ungku Tun Aminah Branch publicity secretary.

He pointed out that Abdul Rahim was jailed for two months after he was convicted of causing bodily hurt to Datuk Seri Anwar Ibrahim at Bukit Aman in 1998.

Anwar had then just been sacked as Deputy Prime Minister and Finance Minister, arrested, and later tried over charges of sodomy and abuse of power.

Rahim Noor later stood trial in over the assault, where a Sessions Court sentenced him to two months’ jail. He had already resigned as IGP, but appealed against the judgement.

When the offence was committed, Abdul Rahim held the highest position in the police force and he failed to be “a role model to other police officers and instead, stood at the lowest level”, said the judge.

“Judge Shaik Daud also contended that Abdul Rahim's action was the worst kind of indiscipline in a disciplined force such as the police.

“It was obviously a case of public interest in which the highest ranking police officer committed physical assault on a defenceless man while in police custody and in this case, Anwar was handcuffed and blindfolded when he was assaulted,” Dr Boo said.

He added that “certain quarters” were attempting to brand Rahim Noor’s appointed role in the peace talks as an inter-personal feud between Anwar’s family and the former IGP.

He said this was intended to divert from the actual issue of setting a more stringent standard of integrity among public officers and government representatives. 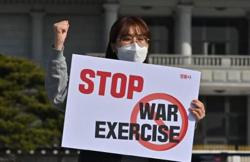