KUALA LUMPUR: “I was offered RM1.5mil if I admit to killing Kevin Morais,” the seventh accused in the murder of deputy public prosecutor Datuk Anthony Kevin Morais told the High Court here yesterday.

S. Ravi Chandaran, 47, claimed that the money was offered to him on Dec 25, 2017, by army pathologist Kol Dr R. Kunaseegaran, who is the first accused in the murder case.

“He said he would give me RM1.5mil. He would also bear the living cost of my family,” he said du­­ring examination-in-chief by lawyer V. Rajehgopal on the 21st day of the defence hearing yesterday.

Ravi Chandaran, who is the sixth defence witness, said Dr Kunasee­garan also told him that he (Dr Kuna­seegaran) would appoint ano­ther lawyer to represent him (Ravi Chandaran) at the Court of Appeal.

Earlier, Ravi Chandaran said he asked Dr Kunaseegaran why he wanted him to admit to the murder charge.

“Dr Kunaseegaran said there was no other way and said that because I was not involved, hence the need for me to plead guilty,” he added.

R. Dinishwaran, A.K. Thinesh Ku­­mar, M. Vishwanath, Nimalan, Ravi Chandaran and Dr Kunasee­ga­ran pleaded not guilty to the murder of Kevin Morais during the journey from Jalan Dutamas 1, Sentul to No. 1 Jalan USJ 1/6D, Subang Jaya, between 7am and 8pm on Sept 4, 2015. — Bernama 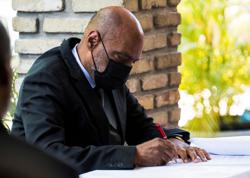