Tough road ahead in Seri Setia

PETALING JAYA: It has been more than a decade since the Seri Setia constituency was first introduced to voters back in 2004.

Although it is a lesser known seat in Selangor, the constituency remains a prominent spot within the Petaling Jaya parliamentary constituency headed by its MP Maria Chin Abdullah. Its other state seats are Taman Medan and Bukit Gasing.

However, the challenge lies on Seri Setia filling a large gap between its urban and rural voters.

Some 70% of its voters are living in urban areas such as Kelana Jaya, Glenmarie and Ara Damansara, with the remaining 30% being the urban poor from Sunway Mentari, Taman Desaria, Desa Mentari and Kampung Penaga.

Although straight fights have been confirmed for the Seri Setia by-election, it is set to be an arduous task for Pakatan Harapan and PAS to convince both urban and rural voters in the 21-day campaigning period.

Observations by The Star found that voters from the lower socio-economic group in Seri Setia are more inclined towards bread-and-butter issues, which may pose a challenge to Pakatan’s candidate Halimey Abu Bakar in campaigning, given that the PKR man is a newcomer to politics. 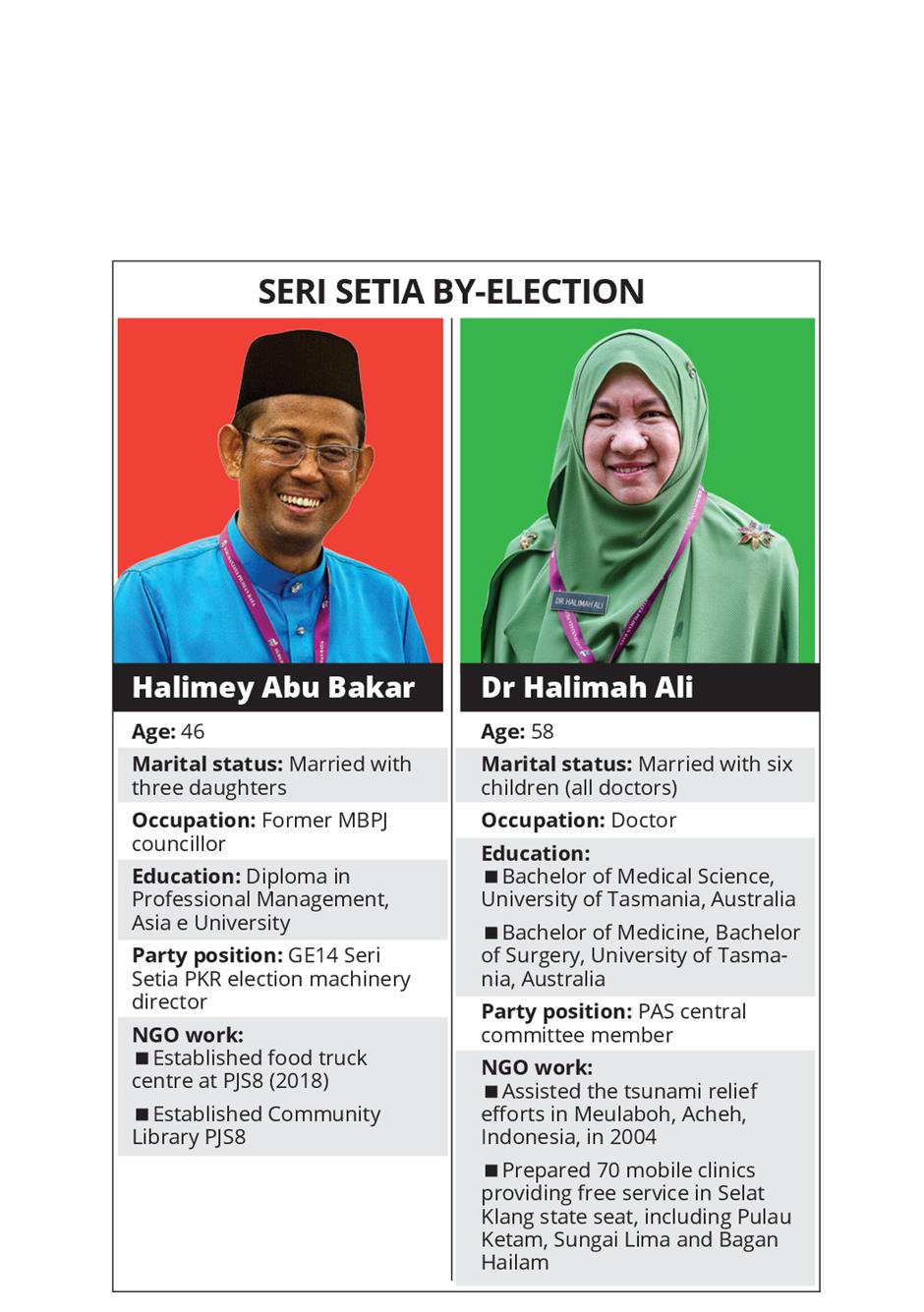 A resident, who has lived in a People’s Housing Project (PPR) in Lembah Subang for 10 years, lamented that crime and hygiene-related issues remain in his area, which has been under PKR’s control since 2008.

“This is the fourth motorcycle I’ve bought in a year. The other three were stolen within weeks.

“Crime has increased over the year, given that there are more drug addicts now. My family and I live in fear. We dare not step outside the house after nightfall,” said the resident, who requested anonymity.

Halimey has pledged to address infrastructure-related issues and urban poverty at PPRs, if he is elected as the Seri Setia assemblyman.

“God willing, I will ensure that we maintain the Seri Setia seat. Among the issues I want to address is urban poverty in this area,” he told reporters on Saturday.

The Seri Setia seat has been a PKR stronghold since 2008 when Nik Nazmi Nik Ahmad defeated Umno incumbent Datin Paduka Seripah Noli Syed Hussin by a majority of 2,863 votes.

Urban voters, meanwhile, have expressed concern that over-development within the Kelana Jaya neighbourhood is changing the look of the township.

MyPJ representative Esham Salam said the state government should not be driven by developing more housing areas and shopping malls but instead look into building schools for the future generation. (MyPJ is a grouping comprising NGOs and resident representatives from Petaling Jaya.)

The population in the Kelana Jaya, he said, has grown to 150,000 but the number of government schools has remained the same since the 1990s.

“We have only two secondary schools here and it is certainly not enough for the community here,” he said.

Esham also underlined the importance of having good schools.

“If a school has hardly any students in it, something must be wrong.

“Schools in Petaling Jaya are known to be good and have produced notable students through the years,” said Esham, who is also the SS7 Lengkuk Golf Residents Association deputy chairman.

While critics have pointed out that it is imperative for Pakatan to ensure a high voter turnout to maintain the majority it secured in the 14th General Election, Universiti Malaya political analyst Prof Dr Awang Azman Awang Pawi feels otherwise.

“There is no need for them (Pakatan) to ensure a higher voter turnout. More importantly, they just need to ensure a simple majority,” he said.

Neophyte Halimey is set to cross swords with PAS’ Dr Halimah Ali, a seasoned politician who was a Selangor state executive councillor under former mentri besar Tan Sri Khalid Ibrahim, and was the Selat Klang assemblyman from 2008 until 2018.

Dr Halimey was widely tipped to contest the Seri Setia seat in GE14, but was dropped in favour of incumbent Prof Dr Shaharuddin Badaruddin, who passed away on Aug 2 after a battle with cancer.

Dr Awang Azman said Dr Halimah is an experienced leader with integrity and is better known to the people of Seri Setia.

“But Dr Halimah’s choice to contest under PAS makes it a big challenge to take on Pakatan’s candidate, even though it’s Halimey’s first time.

“Halimey’s advantage in the by-election is the use of Pakatan’s logo, which is a much more acceptable political brand among urban voters,” he added.

The Seri Setia by-election will run concurrently with that of Balakong on Sept 8.