Equanimity most expensive yacht to be auctioned

PETALING JAYA: Equanimity could smash the world record for the most expensive superyacht ever to be sold at auction in the event it goes under the hammer.

With the vessel now in Malaysian custody, all eyes are on the fate of the luxury yacht reportedly worth US$250mil (RM1bil).

Finance Minister Lim Guan Eng had said on Monday that his ministry wanted to get the best value from the Equanimity.

“Our aim is to draw back as much money as we can from the asset,” Lim had said, adding that the immediate plan was to ensure that all paperwork was in order and that all proper controls were imposed.

An online search of prices fetched so far by superyachts suggest that Equanimity could create a new record if the government decides to initiate an auction.

An article on the website of British publication Boat International listed the sale of the 72m Lürssen Apoise as the most expensive yacht ever auctioned.

“Looking through our system, we also have the Apoise as the superyacht which has achieved the most at auction,” said Vessels­Value associate director Claudia Norrgren.

The Apoise and Equanimity fall under the category of a superyacht or mega yacht, which refers to a commercially operated luxury yacht which is over 24m long.

“If it goes for auction it never realises its full potential as it is a distressed sale,” she said, adding that there have been times when a superyacht could go up in value from its ordered price.

“Pre-2018, people wanted a yacht imme­diately and there was a premium for very young superyachts, around one or two years old.

“Nowadays, it is a pretty stable market for second-hand superyachts, with changes in value set by market depreciation rather than being influenced by economic factors,” explained Norrgren.

The broker said it was in the best interest for the government to keep Equanimity in good condition in order to sell it easily.

The selling price of a used superyacht such as Equanimity, he said, would depend on a number of factors including how many people have been on the ship and used it daily.

The broker said offering Equanimity for charter service could diminish its value.

“The condition (of the yacht) will deteriorate. It will bring in charter income but the resale price of the yacht will be reduced,” added the broker.

Despite its eye-watering value, Equanimity is not the most expensive when it comes to superyachts.

In an online CNN article last month, which listed 10 of the most expensive superyachts, the top spot went to Serene, a 134m stunner that was reportedly bought by Saudi Crown Prince Mohammed Salman for US$550mil (RM2.24bil). 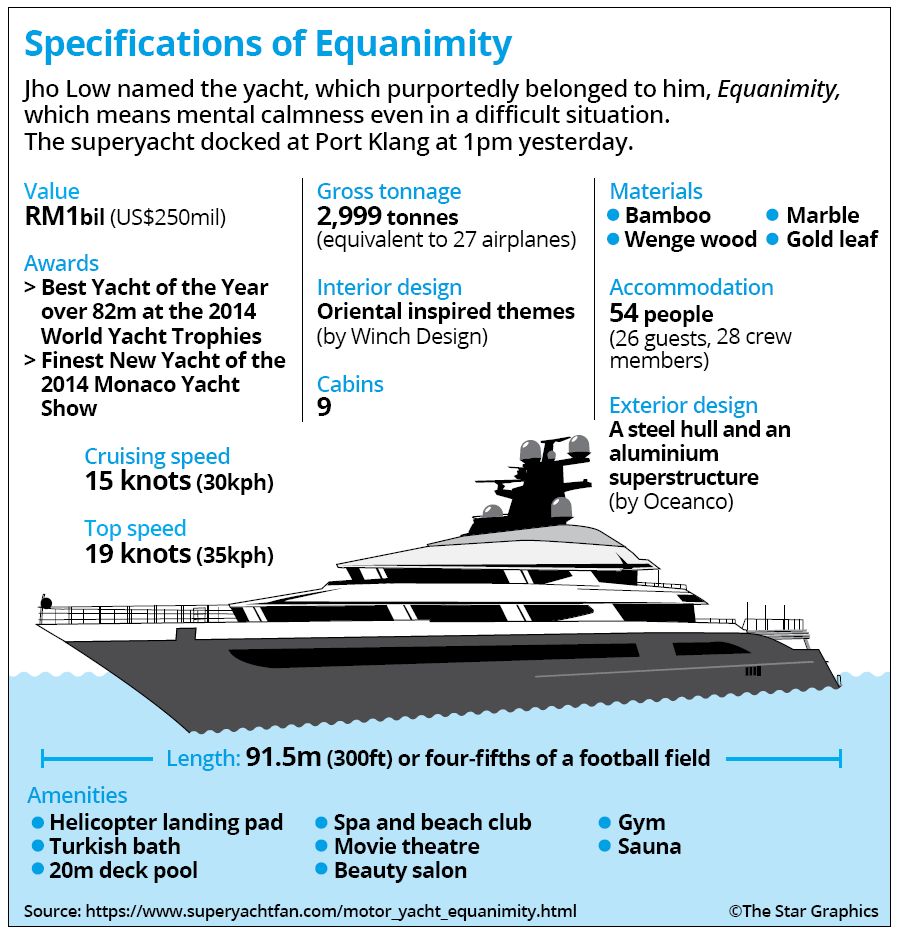 Reaching out for ‘Equanimity’

Covid-19 Watch: 211 new infections bring total to 5,037,995
Mechanic finds newborn boy behind kitchen at Kuala T'ganu apartment
Want to take picture perfect shots? The A to Z of photography
Resounding return after the quiet years
Don’t limit ‘Unity’ coverage
Cost of greens up due to rain and reduced supply
Hurl mandarins in search of love
An all-in-one celebration of cultural diversity
Unwell Anwar misses festivities
Fulfilling vows and giving thanks