KUALA LUMPUR: A ruckus erupted during Parliamentary proceedings Tuesday (Aug 7) when Kinabatangan MP Datuk Seri Bung Moktar Radin uttered the “F word” in the House after being taunted by other MPs.

The incident happened as Bung interjected Khairy Jamaluddin (BN-Rembau) during the latter's debate to ask a question on the Sales and Service Tax (SST).

Bung said that he went to the Selayang market to monitor prices after the Goods and Services Tax (GST) was zero rated.

As he was speaking, Puncak Borneo MP Willie Mongin interrupted and asked Bung which casino he went to, in an apparent reference to a video online purportedly showing Bung gambling.

An irked Bung immediately responded and called Mongin insolent and asked him to retract the statement.

“This is rude, you don't deserve to sit here. Samseng (thug). You want to fight with me? Anytime,” said Bung amidst jeers and taunts from the House.

To this, Thomas Su (PH-Kampar) said Mongin had merely asked a question.

This further infuriated Bung, who then said “F*** you” before sitting down.

A ruckus then broke out with several Pakatan Harapan MPs calling on Bung to apologise and Deputy Dewan Rakyat Speaker Datuk Mohd Rashid Hasnon to reprimand him.

“Standing Order 36 (9) reads that no reference shall be made in any debate to the conduct or character of any MP.

“Mongin had questioned his conduct,” he said.

However, no ruling was made and Mohd Rashid adjourned the House for lunch.

It is expected that the matter will be brought up after the lunch break.

On Monday (Aug 6), a similar incident took place when Datuk Abdul Rahman Mohamad (BN-Lipis) was believed to have muttered vulgarities while his microphone was turned off after R.S.N Rayer (PH-Jelutong) had once again used the word "kepala bapak."

Speaker Datuk Mohamad Ariff Md Yusof, however, reprimanded and reminded lawmakers that he would not hesitate to mete out the necessary penalties if they continued to use inappropriate words. 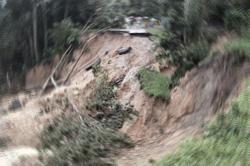