GUA MUSANG: The orang asli are crying foul against a private company which wants to plant Musang King durians for setting up a blockade near Pos Tohoi.

Orang asli Jimi Angah said it was the first time they came across “outsiders” blocking their access to the jungle.

“The workers have lined up lorries at the entrance of the road since Saturday to control our movement.

“We have also maintained our blockade near Pos Tohoi. But we could not leave the jungle because the workers have set up a counter-blockade near the access road.

“We have lodged a police report because we do not want any unwarranted confrontation.

“We hope the authorities will act fast, otherwise those living in Pos Tohoi cannot use the route to send children to school and to go out to town. The whole community is trapped inside now,” he said.

The orang asli in several settlements in Gua Musang initiated a blockade at about six months ago to stop rampant logging and mining activities in the disputed native customary land.

“Our blockade is ongoing. But now the plantation workers have also set up a blockade,” he said.

Volunteers from the NGO Gerai OA (which helps the orang asli market their handicrafts) said they were also trapped by the Musang King company blockade.

Gerai OA said in a statement that unlike the Orang Asli blockade, which only stops loggers and mega plantation companies while allowing villagers, traders and government officials to pass through, the durian company blockade is allegedly stopping all cars, including one sent to ferry a patient to the hospital.

"This is an act which is not only illegal but cruel," said the NGO.

Gerai OA is also worried about food supplies in the villages beyond the blockade as traders and villagers are not able to drive through the area - except for those on motorcycles.

He said this would help to resolve land woes faced by the indigenous community.

"The orang asli feel that they are treated unfairly because their land is being encroached on.

"We have advised them not to do anything against the law, but we understand their discontent.

"Kelantan should observe how other state governments allow gazetting of forest reserves for the orang asli community," he told reporters at the Parliament lobby on Tuesday (July 31).

Before the 14th general elections, JOAK had drafted its own manifesto demanding the recognition and protection of their native rights which they said have long been neglected due to a lack of political will.

JOAK chairman Mustafa Along said then (April 20) that they began to be disillusioned in 2006 when the PAS state government introduced the Ladang Rakyat (People's Farm) programme that saw rapid deforestation in their native lands.

Out of 600,000 hectares of forest reserve in Kelantan, one third, or 200,000 hectares were set for "development" into palm oil and rubber plantations, which included orang asli ancestral lands..

“If we rely on logging, one day the forest will disappear and the state would also lose its source of income,” he said then.

Since 2012, JOAK has set up on-and-off road blockades to defend their lands from logging.

Rampant logging has also been cited as a main cause of the devastating floods that hit Kelantan in 2014. 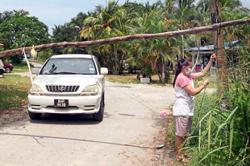